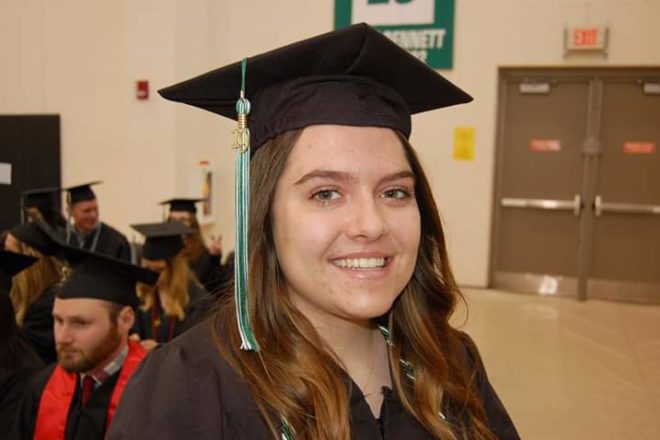 Upon graduating from UW-Green Bay in May 2019, Malcore received the Paul and Thea Sager Award for Scientific Writing from the Cofrin Center for Biodiversity. She presented the poster judged best at the 18th annual UW-GB Symposium for Undergraduate Research, Scholarly and Creative Activity.

Malcore’s interest in biology started in high school. She took human biology and AP biology with Tony Kiszonas, whom she credits with inspiring her to pursue a human-biology degree in college. Her Southern Door teachers played a large part in preparing her for college, she said.

Early on, she realized the need to gain undergrad research experience, so for two years, she conducted field and lab research with the Aquatic Invasive Species project at the Cofrin Center while being mentored by Lisa Grubisha. Malcore’s research involved examining the ecological impact of phragmite treatment at sites in northeastern Wisconsin.

“Not only was I able to do field work – plant surveys, sample collection – for this project, but I was also able to carry over this work into the lab, which was much more my area of interest,” Malcore said.

Applying for and receiving multiple grants has allowed her to fund the research on this project. She has also had several opportunities to present her work at research symposia.

The research that Malcore has done at UW-GB has motivated her to pursue a graduate degree at the University of Michigan, where she’ll start a program in biomedical sciences in the fall.

“I am very excited to begin research in a new area, and I hope that it is just as exciting as my research with phragmites,” Malcore said.

Earning a graduate degree won’t be the last Malcore will see of school, though. She hopes to remain in academia to teach at the college level after enjoying her experiences tutoring and being a teaching assistant.

An introductory field-work position at the Cofrin Center for Biodiversity led to a valuable research opportunity, she said. To this year’s Southern Door graduates, she sends encouragement to make the most of every opportunity because you never know where they’ll lead you.