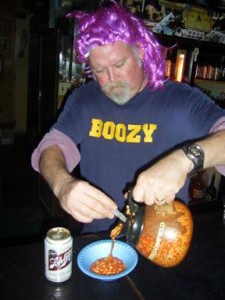 So, it’s January 2nd, 2009, and I’m sitting in my new room in a town they call Sin City. How did this happen? Why did this happen? I’m not quite sure. I left Wisconsin soil one month ago. Poland was east, but for some reason I headed west, west and south. What was I thinking? I’m still not quite sure. In my mind there are two perfect places on Earth, Door County and Poland. I’ll let you choose which is number one, but I can now tell you that out of the million places on Earth, Las Vegas is number 999,999 (remember Indiana). This near last place ranking further clouds my reasons for being here. Was it the old “throw the dart at the map and move there” trip? Not quite.

I’ve been back in DC for almost three years now, and I really felt ready for a change. This I know. I also wanted to leave my automobile behind and move somewhere with a bicycle-friendly winter climate. Las Vegas (so they say) is warm and dry. I have a friend in Las Vegas who would help me get situated here, and I would be a comfortable traveling distance from friends in Los Angeles and Lake Tahoe. So, then factor in that I didn’t have to refill my propane tank back home and that I have fulltime work plus overtime here, and my little winter “snowbird” venture starts to make a little sense. Taking all this into consideration, I still find myself somewhat in disbelief that I actually heeded my own inept reasoning and moved to this desert cesspool.

With only a box containing my bike and skateboard and another box with clothes and a laptop, I boarded the train in Milwaukee. Mother Nature tried keeping my home with an icy blizzard, but Amtrak slid me westward. The stretch from Chicago to Salt Lake City was, dare I say, enjoyable. The nine overnight hours I had to spend in Salt Lake City were anything but enjoyable. A gentleman with an oversized mustache (and cowboy hat and belt buckle to match) sauntered around the station for an hour until he laid himself down below the bench seats to sleep. I watched a mouse run up to his feet a few times and then return to his McDonald’s bag in the corner. Then came my 8-hour Amtrak bus ride to Las Vegas, which offered amazing desert views around Arizona’s Virgin River Gorge. Oh yeah, and by Amtrak I mean “Greyhound.”

My first few weeks here were actually pleasant. I found a room to rent within five days, and a job within nine. I was biking all over town in a hoodie and sometimes just a t-shirt. Hiking in the Red Rock Canyon just outside of town was most amazing. Biking from Boulder City to Hoover Dam was spectacular, the whole time peering down dry mountain slopes to Lake Mead. Finding the Polish deli kept my culinary desires at bay. Even the silhouettes of mountaintops encircling town seemed to welcome me. Then I looked deeper to find the real substance of this town. Why do they call it Sin City when there isn’t one can of Hamms to be found?

Soon after I started biking this urban desert habitat, I noticed two major differences between biking in Vegas and northern Door. The first is the dry unending sea of stoplights. If you catch one when it turns green then you can catch the next few green as well. If one stops you, they all do. The second major difference is the dry unending sea of broken glass. Whether it’s from the drunks carelessly throwing their bottles hither and yon, or be it from the drunk drivers crashing headlights and windshields around every turn, Las Vegas is a city awash with beautifully glimmering broken glass. To an avid bicyclist, this is less than joyous.

Needless to say, when biking around this city one must pay special attention to the drunks, the stoplights, and the broken glass. This is really no problem once you realize that you really aren’t missing anything by keeping your eyes on the road. You see, about 95 percent of Las Vegas is also a dry unending sea of strip malls. This city is surefire proof that modern American architecture is morally bankrupt. Then throw one sushi joint at each end of each and every strip mall, and that’s Vegas, a dry unending sea of strip malls all harboring competing factions of overpriced raw fish vendors. I’m willing to bet that this one single city is solely responsible for the world’s declining fish population.

So, my first few weeks were a bit of a treat, weather-wise. The temps would get up to around 60 during the day and get down into the 40s during the night. Then Mother Nature found me hiding here and worked her magic. The news reports said we got three inches of snow here in the valley. I really only saw one inch, and it was gone by morning. The city closed all the schools for the first time since 1979…for one lousy inch of snow. I was cursed by the locals for bringing such a horrendous “blizzard” with me. The average Sin City driver on snow was another cycling hazard, for sure.

The snow was really mostly visible on the mountains around town, which is an odd sight when viewed through a clump of palm trees. Seeing Christmas lights and decorations adorning the dry gravel front yards made this Christmas seem no less odd. On Christmas Eve I bagged up my skateboard and biked to the nearest skatepark for a few hours of outdoor Christmas skating, usually not an option back home. On Christmas Day I joined some friends to the Double Down Saloon for their free Christmas Day dinner. They were offering up Spaghettios and baloney sandwiches, all washed down with cans of Schlitz. The Spaghettios were warmed up in a coffee pot on the coffee burner. I was genuinely impressed!

My first month in Las Vegas has certainly been a time of transition. I moved from my luxurious palace on Old Stage Road to a cracker box overlooking the pool in a (gulp!) gated community. I moved from the shores of Lake Michigan and Green Bay to one of the driest places in the country. If you don’t count the negligent architecture, the only real sin I’ve seen in this city is their near complete lack of recycling…well, that and their unexplained lack of Hamms. Bright light city gonna save my soul, gonna set my soul on fire. Yup.

Next time I’ll tell you about my one trip to “the strip,” working in a restaurant which served both Martha Stewart and Bjork (though not at the same table), and how Kool-Aid is keeping me hydrated. Bring on the Sin City Chili-Run!!!