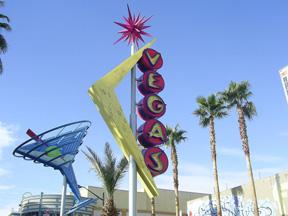 After re-reading my last contribution to this fine publication, I thought it best to redirect my energy in a less spiteful manner. Let’s just chalk it up as an “initial reaction,” shall we? After all, one of my personal goals while coming here was to find out exactly what I might like about this city. Maybe in finding what I like I had to ascertain exactly what it is that I dislike. If that’s the case, then I’m glad the metropolitan mudslinging is out of the way. I mean, how can a Packerlander really hold resentment towards a city that doesn’t even have a possible contender for the Lombardi trophy? Also, the Terrible’s gas station nearest my home has a fine selection of Packer lighters at their checkout counter. I almost feel like saluting when I approach them.

So, yeah, nine days after arriving in this urban desert cesspool, I had secured employment. I had two vague guidelines for the job I was seeking. I did not want to work in a strip mall (reducing my possibilities by nearly one thousand percent!), and I did not want to work for a corporate entity. I also wanted work to be near the home, in case it was raining or my bike got a flat tire or a herd of monkeys escaped from the zoo. I applied at a few restaurants here and there, a Bulgarian café, and a party supply store (ha!) before finding the misguided folks who would dare to hire this misplaced Wisconsinite. I now work at a swank, modern restaurant which claims to serve “farm” food. It is a 15-minute bike ride from my home and the restaurant is its own building! 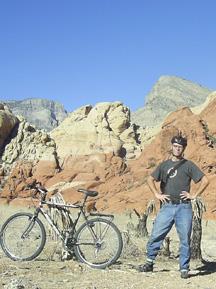 During the hiring process, the chef asked why I was applying there. I told him because it was close to my home and looked like a nice place. He seemed shocked and a little insulted that I had never heard of this place. Apparently, they have won numerous awards, and the chef has been seen on various national TV shows which I’ve never heard of. He showed me pictures in the lobby of all the famous people who dine there from time to time: Martha Stewart, Al Roker, Bjork, Dr. Phil, etc… I almost told him that I see Dr. Phil all the time back home, but then figured he meant a lesser Dr. Phil. Anyway, in the midst of a spiraling recession, which has hit Las Vegas especially hard, I was hired and thrown back into the workforce.

Imagine jumping from the energy level of Door County’s mid-December right into an endless loop of Fourth of July weekends! This place is busy. The kitchen is like a beehive in a blender. The chef is originally from the Bronx and commands the line like a vengeful bootcamp. Work faster. Keep moving. Get it done and move on. Faster. Faster. If you don’t want to work faster there are plenty of unemployed cooks who just got let go from all the casinos downtown who would love your job! To this guy, a New York minute lasts about 13 seconds, and it’s still too long. Private Sicnarf, reporting for grill duty, SIR!

Another thing I find interesting is that the restaurant’s décor has a bit of a modern Midwestern flare. There are plenty of rusty old farm tools adorning the walls alongside images of rustic rural life. Then you notice the modern cable support beams, fiber optic lighting, and tasteful thumping of techno music. Coming from America’s Dairyland, I can’t help but find fault with their idea of farm life. First and foremost, I always think back to all the visits to my Uncle Bernard’s farmhouse. This restaurant does not smell like my Uncle Bernard’s farmhouse. Then, oddly enough, my thoughts turn to my big latch-hook keyring clipped to my pocket. My friend Tom gave it to me many years back after he found it in his father Cedric’s barn near Ellison Bay. It makes me chuckle that my keyring (one of my most valued gems) has more authentic farm integrity than anything in or near this restaurant. I keep it to myself and work faster.

On a different note, a few weeks back was the 11th annual Punk Rock Bowling Tournament here in town. Punk rockers of all shapes and magnitudes fly in from all over the country to test their kegling skills in an orderly competitive manner. My Wisconsin friend Ruckus O’Reilly was here for the entire weekend. I also saw many old friends from all over the country as the city became a punk rock epicenter for four days. Every day included mass bowling at Sam’s Town Casino. Every night included amazing line-ups of great bands from near and far in many of this town’s various venues. Each day I would bike to work, slave through a nine-hour shift, then bike across town to where ever Ruckus was and continue to raise more ruckus into the night. 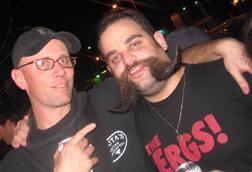 On both Friday and Sunday nights, we met up with my San Diego friends in the band Tiltwheel. Friday was at the Bunkhouse and Sunday was at the Premiere Nightclub. Mysteriously, during both nights’ performances, that Rhythm Chicken showed up in the middle of Tiltwheel’s set to unleash his rampant lunacy on the unsuspecting crowds. Honestly, I don’t know how he and I manage to cross paths as often as we do. Both nights, Tiltwheel ended their set with two Replacements songs, “Skyway” and “Can’t Hardly Wait.” Moving to this dry capitalist playground suddenly seemed worth it for this performance alone. A bizarre sidenote, I saw enough handlebar mustaches this weekend to make Zack Mustachio throw in the towel and rethink construction of his Rollie Fingers shrine.

Last week, on a day off, I decided to bike to various corners of the city and see what I have yet to see. I have stumbled upon the one area of Las Vegas which is actually not an architectural catastrophe. The old downtown area, which was the main downtown area in the ‘50s and ‘60s, seems to be the only area not infested with strip malls. It is also crawling with drug dealers, prostitutes, down-and-out bums, and other various street cretins. I prefer it that way, for it keeps many of the tourists from getting into my photos. Ancient neon signs adorn art deco structures from yesteryear. This is the Vegas one sees in old movies. It’s still there, but most tourists prefer the “new” strip, a vast plastic playground which is built to be torn down and rebuilt every 10 years.

My time in this neon landscape keeps ticking away. Listening to Wisconsin Public Radio online is keeping me sane. The Polish movies from the Las Vegas library help out as well. In a city so full of crime, depression, and heartache, I’ve managed to find a few enjoyable qualities. Also, the Wienerschnitzel restaurants run a great deal, FIVE CHILI DOGS FOR FIVE BUCKS! Until next time, I’m all in.