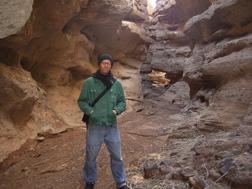 Well, it has come and gone once again, another Super Bowl Sunday. For many of us, this day is better known as Chili Run Sunday, that glorious day when us Northern Door chili fiends assault the peninsula in some outlandish renegade transport inhaling near-deadly amounts of chili with proper refreshments. My last two winters in the county, this has become somewhat of a crazed three ring circus of tom-foolery, smiles, and methane. In the dead of winter, it was always a welcome break. This year, however, I find myself here in the ol’ desert cesspool.

My original intentions were to organize my own Vegastown Chili Run. After some research and urban soul-searching, I found that LAS VEGAS HAS NO SOUL. I feel safe in declaring such soullessness, for this town’s chili options are at near fatal levels. Then I was placed “on call” at my soulless place of employment for the day. That really screwed up my plans. Would the most chili-centric day of the year pass me by without so much as even one bean induced tooting? I received emails concerning some “chili-fest” in Sister Bay and I got the shakes. What was I to do?

That Sunday morning I awoke to the good news that I would not have to work. Things were looking promising. Then I was abducted and whisked to a Super Bowl party in nearby Henderson, a chili-less party, mind you. My molecular structure was becoming stressed. Then I returned to inner Vegas to a full-swinging Super Bowl party at rollerderby Betsy’s home. Betsy had the amazing idea of throwing the first ever CHILI ROADSIT! We had a gang of rowdy folks, lots of refreshments, many portable seating options, and the right mindset. We were lacking in only one main ingredient, CHILI!!!

A fellow chili-warrior and I quick ran over to Wienerschnitzel to order a cooler full of chili dogs, BUT THEY WERE CLOSED! Like I said, the chili options on this town are dangerously lacking. We were reduced to the lowest, most soulless form of chili. The only chili available to us at 9 pm on Super Bowl Sunday was…Wendy’s. We drove away with bags and bags of chili buckets, wondering which one would contain the finger.

Once we rolled around the corner towards Betsy’s place, I saw an all-too-familiar sight that reminded me so much of home. There were loads of people sitting out near the curb, drinking, joking, playing football in the road, laughing, and engaging in general ruckus-raising! I was more than happy to supply them with the desperation-level chili, the “Wendy’s finger special.” Everyone reveled in gluttonous chili appreciation, anxiously waiting for ANY car to drive by for authentic roadsit activity. Not one car passed. A few approached, slowed down to a stop, and turned around! Later, after we had all returned indoors, a police car stood outside near our roadsitting grounds. Apparently, Las Vegas was not ready for such a Wisconsin-style activity.

A few days later, I had a most welcome visit from Ryan and Jill of Leroy’s coffee bar in Ephraim! They presented me with a beautiful 12-pack of Hamms (six of which did not survive the trip across the country). We visited some of this city’s finer skateparks and private backyard pools, the old downtown area, and Roberto’s Taco Shop (my favorite). One night, we also met up with Dale and Jason (two Northern Door folks who are also wintering in Vegas) at the Double Down Saloon. That Tuesday night in early February, this grimy punk rock bar in the underbelly of Sin City probably had more Door County folks in it than most bars in Northern Door! Before leaving, they left me with a life giving bonus bag of Leroy’s Moto beans. My coffee needs are now being met.

Last week, my day off was spent biking uphill for over three hours to Boulder City near Hoover Dam. There, a friend took me biking to the canyons leading to Lake Mead. We hiked a few canyons in search of “canyon owls” which are normally abundant there. We saw no canyon owls, only their poo. However, the views were breathtaking nonetheless. Most of my favorite things about this city are what lays just outside the city limits. As for biking from Boulder City back to my Vegas home, imagine biking downhill for 90 minutes straight, a sweet reward.

There are many things I’ve been missing about the Door County winter as of late. I miss the slow quiet time, trivia night with the Peninsula Trivia League, double-doggin’ at JJ’s after broomball, lazy workouts at the Y, how Bhirdo’s and the Pig are both free of gambling machines, Fuzzy’s big fire with the pitchfork wiener buffet, no police helicopters waking me in the night, amongst other creature comforts. Las Vegas does have a few nice things goin’, however. Tonight I’m biking over to the Double Down to see the Detroit Cobras play for free, on free rum night. Also, this Sunday the Blue Man Group band is playing there, also for free. I’ll bring the chili.