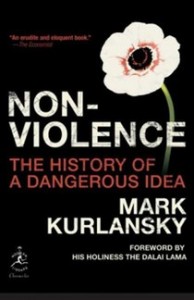 War and violence have been an integral, almost constant part of the world’s history; in fact, in Mark Kurlansky’s book Non-Violence: The History of a Dangerous Idea, he states that philosophers Will and Ariel Durant determined in 1968 “that of the previous 3,421 years, only 268 had been without war” (Page 166).

An ambitious work, Kurlansky’s succeeds in presenting a text that educates and challenges readers in a non-confrontational, direct tone. Amazingly, he manages to tackle the broad subject of nonviolence in less than 200 pages. And though his research is extensive, the book reads like a series of essays, exploring the history of nonviolence while highlighting worldwide events and diverse individuals that stood out as promoters and practitioners of nonviolence.

From the teachings of Jesus Christ and Ghandi, to the examples of Martin Luther King Jr. and Maori Chief Te Whiti, Kurlansky examines the controversial and often times dangerous consequences that may arise from promoting nonviolence. In the open pages he writes,

“Advocates of nonviolence – dangerous people – have been there throughout history, questioning the greatness of Caesar and Napoleon and the Founding Fathers and Roosevelt and Churchill. For every Crusade and Revolution and Civil War there have always been those who argued, with great clarity, that violence not only was immoral but that it was even less effective means of achieving laudable goals” (Page 5).

Kurlansky also touches upon the primarily nonviolent teachings of the world’s major religions, which are often contrived to justify war and violence: “Though most religions shun warfare and hold nonviolence as the only moral route toward political change, religion and its language have been co-opted by the violent people who have been governing societies” (Page 14).

After reflecting on centuries of warfare and violence, as well as nonviolence, it is interesting to note Kurlansky’s statement, “The miracle is that despite all of society’s promotion of warfare, most soldiers find warfare to be a wrenching departure from their own values” (Page 184).

For those who have never personally experienced warfare, consider the vast number of novels, films, and plays that depict war and violence, and can not help but stress the horror, the physical and mental anguish, soldiers, as well as the victims and perpetrators of violence, experience – from Birdsong to The Things They Carried, Apocalypse Now to Flag of Our Fathers, Les Miserable to Macbeth. These works quite often also contain universal and timeless themes of the senselessness of war and violence, as does Kurlansky’s book, which reinforces the longtime saying, ‘history repeats itself.’

Though the world may never experience a time of nonviolence, Kurlansky ends his book with hope and optimism, highlighting the success and progress of nonviolent movements in the world’s history, as well as contemporary society. In closing, he includes a quote by early 20th century French novelist Anatole Frances: “War will disappear only when men shall take no part whatever in violence and shall be ready to suffer every persecution that their abstention will bring them. It is the only way to abolish war.”

The book, winner of the 2007 Dayton Literary Peace Prize, is for everyone – every age, creed, religion, everyone ever effected by violence – all of us.