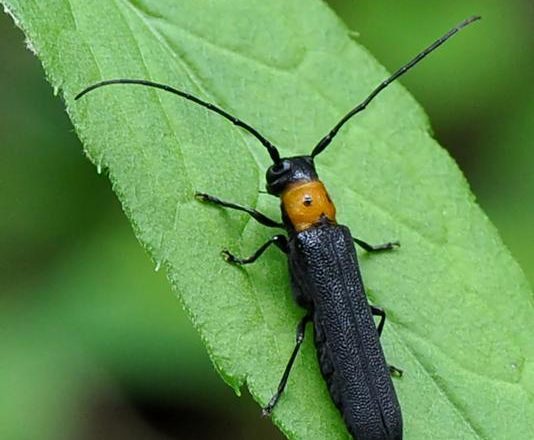 Phenology is the study of the cyclical or seasonal nature of animals and plants. This seasonality allows us to predict quite well when an insect will be doing what, and thus, when we might find damage.

Some damage that’s apparent right now is from the raspberry cane borer (Oberea perspicillata), a beetle in the family Cerambycidae – the long-horned beetles. Adults are typically about one-half inch long, with long, black antennae; black wings; a black head; and a yellow-orange segment behind the head that often contains two black dots in the center. Larvae (immature beetles) are cream-colored, legless and up to three-quarters of an inch long.

The raspberry cane borer has a two-year life cycle. Adult females are active in the early summer, before the raspberry bloom. They first chew two small rings of holes, a half-inch apart, into the raspberry cane, about six inches from the tip. Then they lay one egg between the two rings.

The egg hatches into a small larva that spends its first year feeding within the two girdles on the raspberry plant, and in the fall, it chews down to the base of the cane, where it spends the winter.

The second year, it feeds primarily in the crown of the plant. The following year, it pupates in the spring, and the adult beetle emerges in the early summer.

If you have an infestation of raspberry cane borer, what you’re going to notice first is probably not the adult beetle, despite its rather large size. Instead, you might notice that the top six inches of some of the raspberry canes are wilted and dying. With a heavy infestation, this might be quite apparent, but if you have only a few insects, you might need to look more closely because their presence is easy to dismiss.

If you find any wilted cane tips, look carefully, just under where they are wilting, for two rings of small holes that encircle the stem. As the season progresses, the cane tip may die and snap off at one of the two rings. Therefore, you may also notice dead, brown tips that have broken off.

Luckily, this is one of the easiest pests to manage! You don’t need chemicals or special tools – just something to prune with. Right now, carefully inspect your raspberry patch. If you find any canes with wilted tips, use pruners or a knife to cut about six inches below the lower ring that the beetle chewed into the stem. Gather up all the prunings and destroy them: seal them in a bag and throw them away, or place them in a black plastic bag and leave them in the sun for a couple of days. If it gets hot enough in the bag, the larvae should die and the plant material can be composted. Do not compost the cuttings directly, however, or the larvae will continue to develop.

The second part of management is to perform annual, dormant winter pruning – a standard practice for a healthy raspberry patch and one that typically keeps the raspberry cane borer in check. Pruning also increases airflow around the plants, reducing disease pressure, maximizing yields and improving fruit quality. To learn more about winter pruning practices, check out UW publication A1610: Growing Raspberries in Wisconsin. Removing wild brambles around your raspberry patch can also reduce the number of raspberry cane borers.

The raspberry cane borer is an insect that you can at least not mind too much. Its damage is very apparent right now, so this is the perfect time to carefully inspect your raspberry patch. Look for wilted tips, pull back the leaves to “admire” the carefully chewed rings on the stem, split open the stem (if you want to see the larvae eating inside – optional), then chop off the stem, knowing this is one pest you don’t need to worry about.