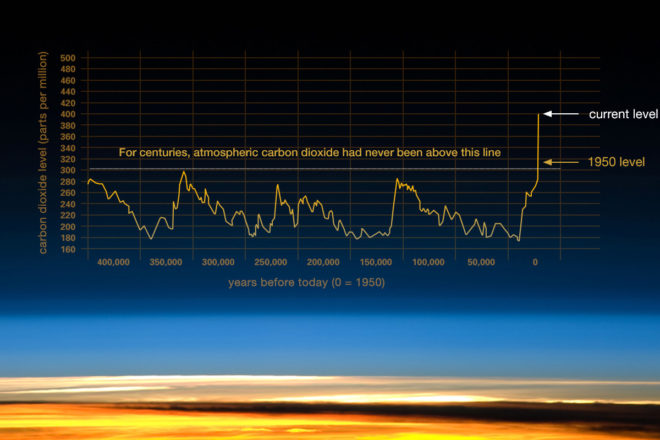 The amount rise in Fahrenheit of the global average temperature in 2016, the hottest year ever recorded.

The number of degrees (Fahrenheit) the average surface temperature has risen since the 19th century.

The current annual rise in the global mean sea level, measured in millimeters.

The number of years in this century that have been the warmest on record.

The percentage increase in the acidity of surface ocean water since the start of the Industrial Revolution.

The percentage of climate scientists who believe that climate-warming trends are very likely due to human activities.

Atmospheric CO2 in parts per million as of July 2017, recorded by the Mauna Loa Observatory, Hawaii. It was 280 ppm when recordkeeping began at Mauna Loa in 1958. The “safe” level of atmospheric carbon dioxide is considered 350 ppm.

The run of months in a row with above-normal heat.

The loss in square kilometers of Arctic sea ice measured in January 2017 and compared to the 1981-2010 mean for January.

The number of years ago that carbon dioxide levels were as high as they now are.

The annual increase in the number of tons of carbon dioxide absorbed by the upper layer of the oceans each year.