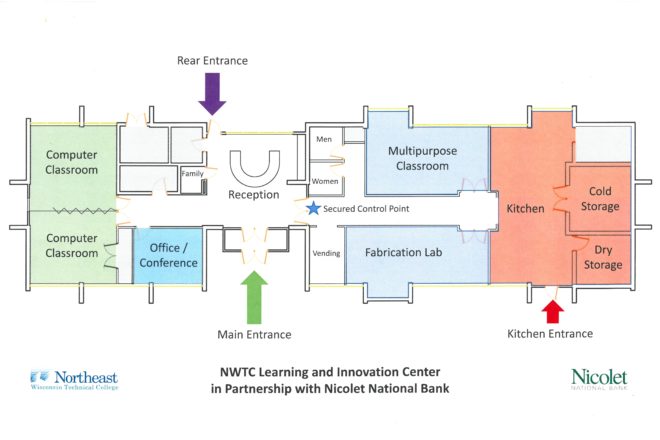 A rendering for the Northeast Wisconsin Technical College Learning and Innovation Center that developers hope to have in place in Sister Bay by spring 2017.

You can expect to be taking classes and using the commercial kitchen in the new Northeast Wisconsin Technical College (NWTC) Learning and Innovation Center in Sister Bay next spring if all goes according to plan, said Dean Stewart, NWTC’s Dean for Corporate Training and Economic Development.

Stewart held a public meeting on Oct. 5 at what will become the Learning and Innovation Center, the former Baylake Bank building at 2438 S. Bay Shore Drive, which has been empty since the bank (now Nicolet Bank) moved down the street to 2477 S. Bay Shore Drive last spring.

Stewart informed those attending the meeting that Nicolet Bank CEO and co-founder Bob Atwell and President/COO Mike Daniels agreed to give the building and three acres of land that goes with it to the college, with naming rights reserved for the bank.

“That frees up capital to help renovate this space,” Stewart said. “We’re really excited about that.” 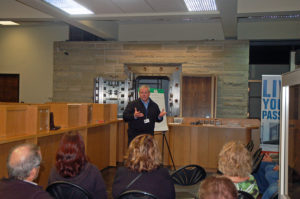 Dean Stewart, dean of corporate training and economic development at Northeast Wisconsin Technical College (NWTC), talks about plans for the NWTC Learning and Innovation Center in the former Baylake Bank location in Sister Bay during a public forum on Oct. 5. Photo by Jim Lundstrom.

Stewart showed a rendering of the concept for the center that includes a commercial kitchen, a fabrication lab, classrooms and an office/conference room.

As for what will be offered, Stewart said the community has identified important needs that can be addressed, including assisting businesses that are here by finding workers, business incubation in Northern Door, finding ways to get younger people to stay in Northern Door, and a vision for lifelong learning.

“At the end of the day, this is your facility,” he said. “We are really just putting in what you are telling us you want.”

Here are some of the things Stewart said people have expressed interest in from a survey and several community forums:

“It’s always been a needed part of the economic development project for Northern Door,” said Mary Pat Carlson, who spent 16 years as director of the Farm Market Kitchen in Algoma until her retirement last November. “Commercial kitchens are really a tool for growing businesses.”

As far as funding the project, Stewart reminded the audience that the citizens within NWTC’s service area voted in April 2015 for a $66.5 million referendum for NWTC to expand in areas where there’s a demand for jobs. “So this project falls within that,” Stewart said, adding, “We try to be great stewards of your dollars.”

The intent is to start construction before this year is out and be ready to open in the spring.”