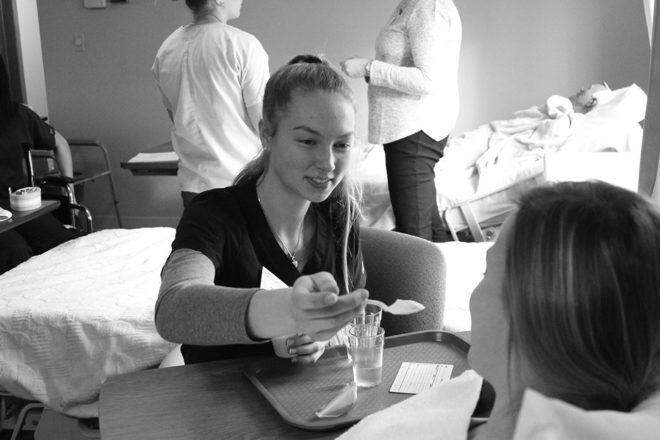 Technical colleges are projected to get an unexpected boost with Gov. Tony Evers’ proposed 2019-21 executive state budget. This amount totals $25 million, and Jeffrey Rafn, president of Northeastern Wisconsin Technical College (NWTC), hasn’t seen anything like it in the past 22 years.

Republicans and Democrats alike have agreed on the importance of technical colleges in training the state’s workers – and for good reason. NWTC released a report detailing the successes of it 2017-18 graduates: employment within six months of graduation is at 92 percent; a median salary of $42,000 for an associate degree is also achieved within six months of graduation; and 97.7 percent of graduates are either satisfied or very satisfied with their training.

Rafn explained why going to a technical college has become more attractive. Dual credits allow students to earn college credits while they’re still in high school, giving them a leg up when they enter college. Tech college is also less expensive, and with a two-year degree, a job with a median salary of $42,000 is achievable.

Rafn also said NWTC works with four-year universities such as UW-Green Bay and UW-Oshkosh to make the credits earned at two-year programs easily transferable, so students who want to complete a bachelor’s degree have an avenue to do so.

Language is also important when discussing technical colleges, Rafn said. Referring to them as “tech schools” might imply that students can slack off in high school and easily get into a two-year school. “College” connotes that hard work will be expected.

“The legislators in our area have been very supportive of a college,” he said. “They like what we’re doing; they see the immediate return; they’re hearing from the strong voices of businesses saying we need more skilled workers. I think there is strong bipartisan support here.”

NWTC already has plans for the funds. According to a press release, the goal is to continue expanding dual-credit opportunities into 32 high schools, and a new course structure will make it easier for students to advance with those credits.

Students will spend similar amounts of time studying, but instead of focusing on four to five classes, they’ll be able to focus on two or maybe three, Rafn said. NWTC has tested a few eight-week courses and has found them to be very popular. With this format, students who come into college with dual credits earned in high school can enter the classes that are more suited to them right away.

“It’s going to allow more flexibility for students to get into programs sooner and use the credits that they have earned,” Rafn said. “It’ll increase what I will call ‘speed to market.’ They’ll get into school sooner, and they’ll be able to get out sooner.”

Eight-week programs are also helpful for students who experience an emergency or illness during their semester. If they end up having to drop their courses, instead of dropping four or five, they will need to drop only two or three and can pick them back up again during the next eight-week session.

It’s services like these – what NWTC calls “wrap-around services” – that  the college would like to strengthen, Rafn said. There are times when students may be homeless, food-insecure or going through an emergency, or they may have mental-health challenges that cause them to miss class.

Some students withdraw or drop out because they’ve fallen behind, but these services encourage them to stay in school while helping them to address those issues through counseling, shared-harvest programs and homelessness support.

“The whole idea is that we’re going to do whatever it takes to get that student to be successful,” Rafn said. “If the student’s not successful, the question for us is not, ‘What did the student not do? What’s wrong with the student?’ The question to us is, ‘What could we have done differently in order to help that student succeed?’”

Another goal for NWTC is to develop programs that “can help Wisconsin grow in high-demand industries,” the college said in the same press release. NWTC is always looking at the labor market to expand programs where there’s demand, Rafn said. For example, it’s expanding its medical assistant, electricity, dairy science and agronomy programs.

But these expansions and additions aren’t possible without this extra funding, Rafn said.

“We’re just very pleased and thankful for the support that not only the governor, but the legislators in particular have provided,” he said. “We expect to do good things with the support we continue to get.”