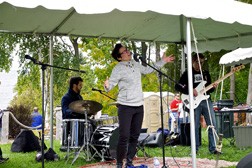 Hey, kids, here’s a cautionary tale from a working musical group by the name of the One 2 Many Band.

“The more we think about what we thought was the genius of the name, I’m not sure there’s much genius there, but it is appropriate for an ale fest,” said Johnny Rockit, guitarist for O2MB.

Which is convenient, since the One 2 Many Band returns for its second Egg Harbor AleFest on Saturday, Sept. 20.

“Basically, the band started as an excuse to get together and drink on Saturday morning,” Rockit said. In fact, he said, bass player Brian Ray once referred to the band as “a social club with instruments.”

“This was before Steph joined us,” Rockit said.

“Nobody could sing. Nobody cared to,” Rockit said. “Brian mentioned, ‘I think I know someone who might want to sing with us.’ So she came, and, literally, the first two notes out of her mouth, we just stopped her and said, ‘Do that again.’ She did it again and we’re like, Damnit, now we have to do something. And it’s been going ever since.”

Rockit said the lineup has been basically the same except for drummers.

“Drummers are a weird thing. They tend to come and go,” Rockit said. “Basically to stabilize the drummer position, we had Steph marry our drummer.”

Stephanie and Joe Wagner were married in Door County in 2007 and now have two sons, one of whom, Beaumont, helped his dad on drums at last year’s AleFest.

“He’s actually got better rhythm than his dad, so we’re waiting for him to grow up,” Rockit joked.

Although based in Milwaukee, Rockit said the band has a real connection to Door County.

If you happened to catch the band at the Gibraltar Grill’s end of summer party over Labor Day weekend, don’t worry about hearing the same music.

“We customize all of our set lists,” Stephanie said. “It’s always hard to predict. We try to put out a lot of drinking songs.”

“It pretty much changes every time out. It depends on the audience,” Rockit said. “Gibraltar Grill over Labor Day was a great event, but we probably won’t do anything we did from that show.”

The band will perform from noon to 1 pm for the fest’s VIP session. Fellow Milwaukee musician Scotty Meissner will play from 1 to 3 pm, and O2MB is back from 3 until the end of the fest at 5 pm.

“We had a great time last year,” Rockit said. “It was such an education. If you want a beer that tastes like pumpkin, you can get it. If you want a beer that tastes like licorice, you can get that. We were amazed by the beers you can get. I don’t consider myself a big beer drinker, but now that Door County Brewing has opened, they have made me a convert to their Goat Parade and Polka King. That’s one of the side benefits, being able to wander around and get samples. We really think it’s one of the best events of the year and we’re very happy to be coming back to do it.”

“It’s about having fun and creating a party,” Stephanie added. “We know if we’re having fun, everybody else will too.”