Nearly three weeks ago we inaugurated the first African American President of the United States of America. We blushed with pride and smiled with delight as Barack Obama became our 44th President. A page hadn’t been turned; the entire book had been rewritten.

In a moment of clarity “we the people” made a decision, and it felt right, it felt just. But above all, it felt, and continues to feel, personal. And each story shared during the days before and during the inauguration was personal, touching, and soulful. It is those stories that make this inauguration unique, different, and special.

My participation in the inauguration was unexpected. My son, a National Security Immigration Analyst for the Department of Homeland Security, moved to the other D.C. nearly two years ago. With little coaxing, my husband and I accepted his invitation to visit D.C. during the inauguration, and the offer of free housing was too good to pass up. 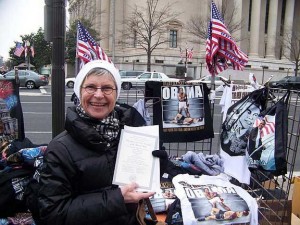 The author in Washington D.C. for Obama’s inauguration.

Next step? Get tickets, both plane and inauguration. I secured the flights and moved on to the inauguration. Senator Russ Feingold’s Green Bay office was my first call and the staff person was pleasant and accommodating. That was easy, I thought. Well, not so quick, Bucko. I was redirected to the Senator’s D.C. office where his staffer Will Sebern informed me I “was on the list” along with thousands of other Wisconsinites.

When all was said and done, I was awarded standing room Silver tickets when someone turned theirs back. When I picked up my tickets days before the actual event, I was informed even the eminent Senator secured only 10 seats. So I settled with a quiet whimper.

During the first days of my visit, my son guided us through a tour of the Capitol where preparations for the big event had begun within days of the November election. Blocks of port-a-potties were set in place. Reams of fencing were installed to corral the crowds. Bleachers were constructed and giant banners announcing color-coded seating were hung.

And everywhere, people…and not a stranger among them.

“It’s basically a carnival atmosphere, well half carnival and half county fair, like a college football game weekend. Everyone talking, milling around like on a campus. The only thing missing is the tailgate,” said my son.

Walking the Mall, my little group chatted with a couple from Florida who had just arrived. Their suitcases in hand, they paused on the Mall to soak up the atmosphere. They were giddy with excitement.

Our next visit was with a fellow reporter, Andrew Heller of The Flint Journal in Michigan. He was chatting with pedestrians just as I was. Bundled up against the chilly temps, he queried, “So what’s your angle? How are you going to write your story?”

I had to grin; it was so easy.

“It’s personal,” I told him. “Just look around at everyone on this Mall. Everyone is involved. Obama is everyone’s president and we are all hopeful – we together can make change.”

And what brought Andy to the inauguration?

“It’s especially important for us in Michigan and a GM town, because we always say if the national economy is bad right now, magnify that times Michigan being the worst economy in the nation, and multiply that by Flint close to being the worst economy in Michigan, and that’s why I’m here,” said Andy. “It’s a big deal for us to have someone who understands what it’s like to struggle in the White House.”

And everywhere the stories continued. I talked to a woman from Mississippi about her life in the south as we traveled the Metro. Resting my weary feet while having a cup of coffee, I listened to a neighbor table’s discussion of the challenges of getting into the city.

Waiting to cross a busy street in Dupont Circle, I met Victoria and Antoinette Moody, sisters from Chicago. Victoria’s story was more personal than most.

“I met Obama when he was elected a senator. He’s someone to behold and speaks from the heart,” she said. “Talking to this man, you just like him.”

Monday morning we decided to scope out the parade route. Within two blocks of my son’s apartment, however, we were halted by police barricades. Turning to a police officer, my son questioned the situation. Shrugging his shoulders the officer responded, “What do you think?”

Crossing to the other side of the street, we moved with the gathering crowd coming to a halt across from Sasha Bush House, an emergency shelter for teens. Every eye was focused on the door at the side of the white building.

“What’s happening,” we inquired of one of our neighbors.

“Barack Obama is inside the house doing service,” was the reply. The three of us turned as one body. Could it be, really? We were that lucky? Well, as luck would have it, we were.

Chatting with our new friends, I turned to an adorable little girl standing next to me and innocently asked her, “And who are you waiting for?”

With a toothy grin, she recited, “Barack Obama!”

And there you have it, the sum total of the impact of our new president. Even a five-year-old knows his name, and not only that, can pronounce it. And so with a smile, I turned back in the direction of the shelter as the secret service moved the cars closer to the door.

And the chant that would echo throughout Washington, D.C. for days picked up pitch. “Obama, Obama, Obama…” And there he was, smiling broadly, waving his hand at us. It was too wonderful.

I don’t think I need to fill in the details of the actual event. The headlines certainly provided stories of the thousands who never made it in…the halted Metro trains…massive bridge and road closures. And the day after, well, that was another story. Countless people were stranded in the airport; more than 200 tons of garbage littered the Mall; fences lay in snarled heaps, trampled by escaping spectators.

But the good mood lingered and the city began recovery the next day. And I wouldn’t have missed this inauguration for the world. It was magical, truly magical. With a deep breath, the world exhaled as President Obama sat at his desk in the Oval Office and went to work.

When I opened my computer upon my return home, I found an email from the Michigan journalist I had met. Following his link, I discovered Andy had indeed followed my lead and had written a very personal story about the inauguration, which included a story my son had shared with him.

And my son continued, “You wouldn’t have heard that eight years ago.”

Added Andy of Michigan, “And he was right about that.”