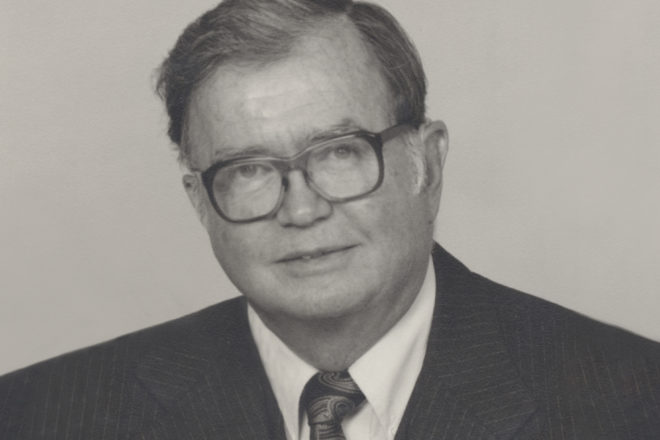 He was born December 7, 1929 in Watertown, WI to G. Gordon Frater and Hazel Alice Hathaway.

Upon graduation from UW Madison in 1952 with a degree in Mechanical Engineering, Allen joined the US Navy and graduated from OCS in Newport, RI. He served at the Pentagon as a missile procurement officer during the Korean War where he met his future bride Angela Marie Sabetti. They married March 27, 1954.

LT JG Frater received an honorable discharge in 1955 and returned to Watertown to join his father and brother in the family business at the GB Lewis Co. Allen began his long and illustrious career at the Lewis company as a factory foreman, respected and beloved by his coworkers as he worked his way to Executive Vice President upon his father Gordon’s retirement. The company was at the forefront of the fiberglass industry and held patents for boxes and systems sold throughout the world. After 18 years and a buy-out at the Lewis Co., Allen embarked on the next 40+ years in business as a consultant, investor and owner in many successful endeavors – his last position being as an owner and officer at Infocor until his retirement in 2008, where his daughter Cheryl remains as CEO and president.

In addition to Allen’s passion and acumen for business, he was also a talented athlete who enjoyed bowling and playing hockey, basketball and baseball in his younger years; and ping pong, golf, tennis and skiing throughout much of his life. He had numerous interests and hobbies: training homing pigeons in his youth; boating, reading, stamp and coin collecting, fishing, card playing (especially bridge and cribbage) and most of all, spending time with his family – he loved anything shared with his children.

Allen was preceded in death by his parents, and brother Milton Frater, Lake Mills.

A Christian Burial Service will be held at Stella Maris Parish-Baileys Harbor site on Wednesday, December 22, 2021 at 11:00 a.m. Military Honors will follow at the church. Burial will be at St. Mary’s of the Lake Cemetery.

Huehns Funeral Home, Inc. & Door County Crematory LLC in Sturgeon Bay are assisting the Frater family. Expressions of sympathy, memories, and photos of Allen may be shared with him family through his tribute page at www.huehnsfuneralhome.com.