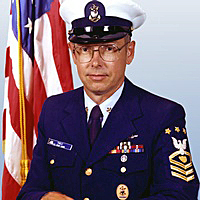 Allen William Thiele, 77, from Washington Island peacefully passed away in his home on September 23, 2017; due to liver failure. He was born to Donald E and Leona R (Duveneck) Thiele on May 28, 1940; in Manitowoc, Wisconsin. He joined the Coast Guard upon graduating from Manitowoc Lincoln High school. He was stationed on Plum Island in the 1960s, just off the southwestern tip of Washington Island. It was on Washington Island where he met his wife Nancy (Llewellyn) at “the bitters bar”. In 1986 when the family was stationed in Dubuque Iowa, Allen was selected from among his peers to serve in Washington DC as the 5th Master Chief of the Coast Guard. Allen and Nancy retired from the Coast Guard in 1990 after honorably serving our country for 32 years.

Upon retiring, the family moved to Washington Island, Wisconsin, where they finished building their home. Though retired from the Coast Guard, Allen loved to work, and took on a job with the Washington Island Ferry Line. Allen was an active member in the community. He served on the Town Board, the Lion’s Club, Velkommen senior housing board, Trinity Church Council, CPOA Green Bay chapter board, and the American Legion Post 402. In 2002, Allen retired from the ferry line and he and Nancy took to travelling during the summer months to help build churches with the Mission Builder organization. They volunteered their time until Allen no longer had the strength to participate on the builds. They have a new house on Washington Island where they enjoyed a number of “Lutheran Hours” before his passing.

A memorial service will be held to celebrate his life on October 14 2017 at Trinity Lutheran Church on Washington Island at 11:00 am. Casperson funeral home, Sister Bay, is assisting the family. October 14th is Fall Fest weekend in Sister Bay and the highway will be closed. If you are planning to attend the memorial service, take Highway 57 out of Sturgeon Bay and plan accordingly to account for the ferry schedule and closure of the highway.

In lieu of gifts, the family suggests a donation to Hurricane Relief, Legion Post 402 or Wounded Warriors United Wisconsin organization.

Allen’s service biography can be found at https://www.uscg.mil/history/people/Allen_Thiele.asp