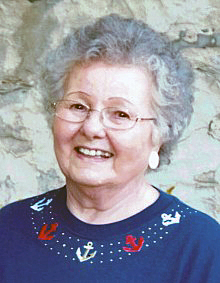 She was born Jan. 16, 1932, in Sturgeon Bay, the daughter of John Franklin Christian Hansen and Bess Viola (Logan) Hansen. Althea graduated from Sturgeon Bay High School in 1950. She was united in marriage to her high school sweetheart, Benjamin Logerquist on August 22, 1953 at the Congregational Church in Sturgeon Bay, and they were blessed with two daughters and over 61 years of marriage. Ben died November 29, 2014.

Althea initially worked as an accountant at the shoe factory in Sturgeon Bay and then with Rayovac Lantern in Madison. She was a devoted wife to Ben and supported him throughout his years of service as an officer in the United States Army. She became an expert at packing and setting up a new household, having moved 27 times in 26 years. They returned to Door County in 1981 after Ben retired from service.

Althea had a strong faith and was a member of the Sturgeon Bay United Methodist Church and also attended the Jacksonport United Methodist Church. She had a love for music and enjoyed singing in church choirs for over 50 years. Althea was a Girl Scouts leader and organizer for her daughters and was active on church committees. Her love for the Green Bay Packers was evident from the green and gold attire she often wore, and she instilled that love for the Packers in her daughters. Althea was known for wearing her housecoat until noon. She found relaxation in reading and tending her vegetable and flower gardens.

She was preceded in death by her parents; husband; and four brothers and one sister, Marcus, Jack, Giles “Chub”, and Benjamin (Harriet) Hansen, and Elizabeth “Betty” (Clayton) Euclide.

Althea’s life will be honored with a funeral service held at 11 am on Saturday, Feb. 24, 2018 at the Sturgeon Bay United Methodist Church with Rev. David Leistra officiating. She will be laid to rest in Lakeview Cemetery in Jacksonport, beside her beloved husband, Ben.

Friends may call from 4-8 pm on Friday, Feb. 23, 2018 at Huehns Funeral Home in Sturgeon Bay and at the church, Saturday morning, from 10 am until the time of service.

Memorials may be given in Althea’s name for the Jacksonport Fire Department and the Sturgeon Bay United Methodist Church.

Expressions of sympathy, memories, and photos of Althea may be shared with her family through her tribute page at www.huehnsfuneralhome.com.