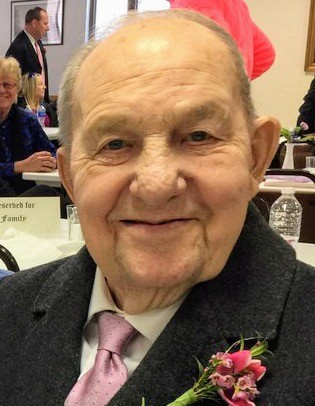 He was born in Miles City, Montana, and moved to Fish Creek shortly after his birth. Itsie graduated in the Class of 1943 at Gibraltar High School. Not long after he graduated, he was drafted into the United States Army, and in 1944, he was deployed to Okinawa to fight in World War II. He was overseas for two years.

On Jan. 17, 1948, he married the love of his life, Janet Lucille Beyer, at the old parsonage in Baileys Harbor. Together they raised eight children, enjoying what Northern Door County had to offer.

Itsie and Janet owned a variety of businesses throughout their marriage, including Beyer’s Cottages (Edge of Park), Red Owl Grocery Store (On Deck), Dreamland Motel (Julie’s Park Cafe and Motel), Krause’s Pony Ring (Gibraltar Grill), Fiesta Restaurant (Fish Creek Grill), Edgewater Motel, Lang’s Resort (Old Post Office Restaurant) and 57 Depot. He was also the developer of the Fish Creek Condos, Fish Creek Estates, Orchard Condos and Hilltop Inn. In addition to their entrepreneurial endeavors, he helped his father build the Eagle Tower (where he picked up scrap wood and was a runner), drove the strawberry truck from Baileys Harbor to Illinois, was the Fish Creek constable and drove a bus for the Gibraltar Area Schools for 35 years, a job he loved dearly.

He enjoyed golfing, gardening, mowing the lawn, being a member of the Egg Harbor Lions Club, vacationing in Florida, socializing with friends and spending ample amounts of time with his family, which was one of his most treasured endeavors of all.

A funeral service to honor Itsie’s life will be held at Stella Maris Parish in Fish Creek on Saturday, March 2, at 12 p.m. He will be laid to rest next to his wife, Janet, in Blossomberg Cemetery.

In lieu of flowers, memorial donations may be made in Itsie’s name to the Eagle Tower Fund or to the Janet and Alvin Krause Scholarship.

The Krause family would like to give a special thank-you to Leanne Cruz for caring for Itsie over the past few years. Moreover, the Krause family would like to thank the wonderful staff of St. Vincent, The Bay at North Ridge Health and Rehabilitation Center for their care and help over the last few months, Pastor Frank of St. Paul Lutheran Church, Casperson Funeral Home for its help with funeral arrangements and Father Ruby for allowing us to use the Fish Creek church. We would additionally like to extend our thanks for all the love, support and words of gratitude from dear friends, the loving Door County community and beyond.

Casperson Funeral Home in Sister Bay is assisting the Krause family.  Expressions of sympathy, memories and photos of Itsie can be shared with his family through his tribute page at caspersonfuneralhome.com.