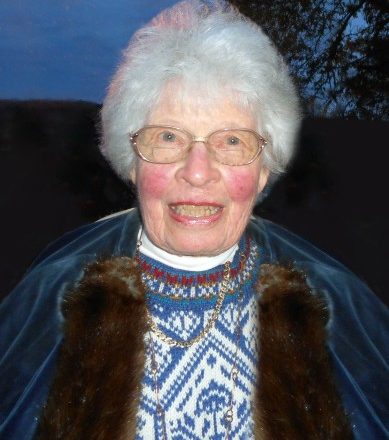 She was born July 12, 1925 in Chicago, IL to Ingolf Fredrik J. Petersen and Anne Eleanor (Willey) Petersen. Anne graduated from Morgan Park High School and enrolled at Wright Junior College for secretarial training. Anne married Kenneth Robert Glabe in 1949 and lived in the Beverly Hills/Morgan Park neighborhood of Chicago until 1955, when she and her family moved to Mount Prospect. She was the secretary in the Science Department at Prospect High School for many years. Anne also served as a Girl Scout leader and Cub Scout den mother. She attended Morgan Park United Methodist Church and then St. Mark Lutheran Church in Mount Prospect.

Anne’s passions were family, faith, and Ephraim. She learned to love the (Ephraim) community from an early age as she had visited every year since 1926. Anne’s beloved father, Ingolf, had built a cottage on the shore just before she was born and brought the family there to spend the summers.

She always said one of her lifelong dreams was to retire in Ephraim, and she made that dream reality in 1984 and became a full-time resident in Ephraim. Anne joined a local genealogy group and enjoyed finding many other familial connections in Door County. She spent many hours immersed in creating her family tree, editing thousands of photos, and keeping in touch with friends as a technologically-savvy nonagenarian. Anne served as an election official in Ephraim for many years. She loved everything about Ephraim and was humbled when she was chosen Fyr Bal Chieftain in 2017. As Anne said at the time, “I have lived in other places, but Ephraim is my home.”

The Ephraim Moravian Church became her congregational home. Its pastor and fellow members sustained her in her faith, and she treasured the close sense of community and friendship the church provided.

Anne’s love of sailing meant that her children were passengers on a sailboat before they could walk. She was an active member of the Ephraim Yacht Club, racing competitively throughout the 1940’s and 1950’s. Anne was granted life-time membership on her 80th birthday. As an avid amateur photographer, she documented every family event with snapshots and 8mm movies. Anne was an experienced knitter, and for a time taught knitting in an adult education program. She passed those interests on to her children, as well as giving them many opportunities to develop their own skills – always encouraging and supporting them – and taking great pride in their accomplishments. Likewise, Anne thoroughly enjoyed being a grandmother, and later, a great-grandmother (as the thousands of pictures in her computer will bear out.)

She is remembered as being tough and determined, never one to be taken advantage of in any situation, though always putting her family’s needs first. Anne remained fiercely independent until the passage of time and Parkinson’s disease made living alone an impossibility.

Anne was predeceased by her parents; former husband; and brother, Donald.

For the last two and a half years of her life, Anne was cared for by the expert and loving staff at Good Samaritan Society – Scandia Village in Sister Bay. Her family is truly grateful for all the wonderful individuals who became part of her life there.

A memorial service is being planned for summer 2022 – to be announced.

Casperson Funeral Home & Cremation Services in Sister Bay is assisting the Glabe family. Expressions of sympathy, memories, and photos of Anne may be shared with her family through her tribute page at www.caspersonfuneralhome.com.