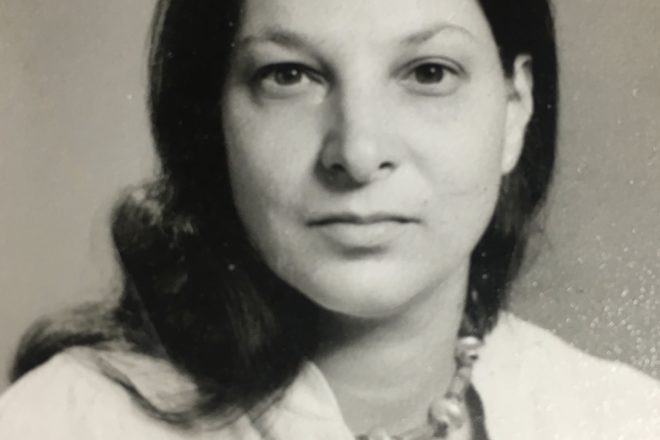 Born in 1940, she grew up in the South Bronx and Queens, graduating from New York’s esteemed High School of Music and Art (now LaGuardia). She had degrees from Queens College, University of Pennsylvania and a PhD from the University of Chicago.

A Professor of Humanities and Women’s Studies at the City Colleges of Chicago, she had affiliations with University of Chicago including the Munda Language Project , and was a Senior Fulbright Recipient. She was the author of respected studies on Indus Valley script and the Munda languages. She also edited a collection of Indian women’s poetry titled ‘In Their Own Voice’.

A poet herself, Arlene was published in multiple periodicals including Women’s Review of Books, Rhino, Colorado Review, Off Our Backs, Xanadu and many others.

She spent many years living abroad in India working on tribal languages and had a great love for the country, its people and culture. These were some of her happiest times.

Door County, Wisconsin always remained one of Arlene’s favorite places where she had old friends. A long time resident of the Hyde Park neighborhood of Chicago, she was a singer with University Chorus and Le Cantanti Di Chicago.

Arlene was a talented cook and baker. She loved cats, great food, classical
music—especially opera, travel and books. Her dreams were many, as were her accomplishments. She considered herself a feminist and was concerned about the direction of the country. Outspoken, determined and forgivably imperfect, she did her best and lived a full and complex life that took her far.

Arlene leaves behind, a husband Prof. Norman H. Zide, two sons Gregory and Bill, a cat Alix, many friends and a body of work. The presence of her absence will remain.

She will be missed.