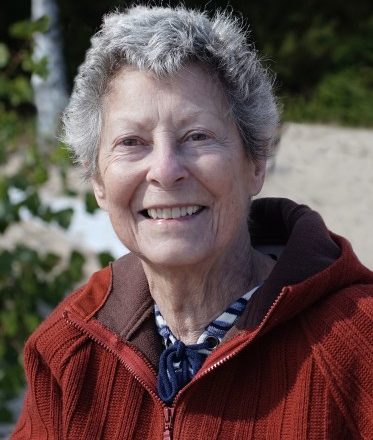 Arlene Mary (Hoerres) Peterson was born in Sturgeon Bay on November 27, 1946 and raised in a home next to Lily Bay on Lake Michigan. She had fond memories of spending time with her cousins and siblings, playing along Lily Bay’s beaches, creek, and around two of her uncle’s establishments, Wester’s Fish House and the Lily Bay Sawmill.

As a young girl, she attended Saints Peter and Paul Catholic School in Institute, WI, where she learned what a wooden ruler looked like and how it can be used in ways that aren’t for drawing straight lines. When she finished 8th grade, she attended Sevastopol School until she graduated in 1965.

Following graduation, she worked in Sturgeon Bay, WI at Peterson Builders Inc. It was at this time, when she met her future husband, Donald “Pete” Duane Peterson, who was stationed in Sturgeon Bay from 1965-1969 on the Coast Guard Cutter, Mesquite. They married in 1968 and proudly celebrated their 50th wedding anniversary in September, 2018.

Arlene continued to work at PBI until she became a mother in the 1970’s. By the early 1980’s, she had become a ‘lunch lady’, serving food to hungry kids at Sunrise Elementary School. This job allowed her to focus on being a mom to her two children, her children’s friends, and to a pet cat, (who her children promised to take care of) named, “Kitty”. After her children became more independent, she also worked at the bustling and popular Cherry Point Mall at fashionable clothing stores, Stevenson’s and Hurrah!, and later on at Schultz’s Family Store. Eventually, Arlene would go on to work at Whitetails Unlimited for many years until she retired.

While her children may have been grown, her will to nurture did not stop. One day, In the mid 2000’s when she was volunteering at the Wisconsin Humane Society, she brought her work home with her, an orange cat she named, Puff. Like a Jack and Jill book, she and Puff had many adventures walking around the backyard together. Most interesting of their adventures, included admiring Monarch butterflies. However, what seemed to be just an appreciation for her garden pollinator, quickly grew into something more after bringing some eggs into her home on one summer day to watch the entire metamorphosis of this colorful insect. It was from this point in 2012, that this fascination turned into a passionate mission to make a difference in the threatened Monarch population. Every day, during the summer, she would collect the Monarch’s eggs and feed the caterpillars that hatched from them with her milkweed. It was quite an impressive operation she had set up, and Puff often observed with curiosity. As it turns out, she proved to be a naturally skilled documentarian and kept a detailed journal on her ‘rescues’, chronicling: dates the eggs were found, how many eggs, births, deaths, genders, and release dates. Over the course of the 8 years, she documented the release of over 900 monarchs into the wild.

Apart from her passion to raise monarch butterflies, she had many other interests that included gardening, cooking, taking Learning in Retirement courses at NWTC, crafting, coloring and volunteering. Over the years, she volunteered for Habitat for Humanity, Wisconsin Humane Society – Door County Campus, and the Door County Medical Center Skilled Nursing Facility. It was at the Skilled Nursing Facility where she spent time making resident’s feel good by styling the residents’ hair in the ‘beauty salon’. She also contributed to the residents by using the skills she developed while sewing really great mother-daughter plaid shirts in the 80’s, to produce ‘shirt savers’ for the residents.

Like the butterflies Arlene cared for, there came a time when she experienced her own metamorphosis, and that took place on January 13, 2021 at her home. She is preceded in this change by her father, Walter Hoerres; mother, Marie Agnes (nee Wester) Hoerres Wagner; step-father Ernst “Jack” Wagner; her siblings, Norman Hoerres and Marian Fabry; brother-in-law, Claude Fabry, father-in-law, Walter Peterson, Sr.; mother-in-law, Pauline Peterson; sister and brother in-law, Ethel and John Wysocki, and the family cat, Kitty. She is survived by her husband, Don “Pete”; daughters, Sharon and Carolyn; one sister, Donna (Steve) Asher; in-laws, Mary Hoerres, Wally (Nancy) Peterson; nieces and nephews; lifelong friend, Beverly Luethge; and her pet cat, Puff.

While Arlene’s journey continues, you may still visit her at Bayside Cemetery or somewhere in nature. At Arlene’s request, she didn’t want to have a traditional, formal service or funeral, and instead wished to have a celebration of her life held at a later date when family and friends can gather together safely. If anyone would like to make a remembrance in Arlene’s name, please consider donating to Unity Hospice, the Pete and Jelaine Horton Skilled Nursing and Hospice Care Center (c/o Door County Medical Center Foundation), Crossroads at Big Creek, Inc., Wisconsin Humane Society – Door County Campus, or a charity of your choice. Bidding a Monarch butterfly a safe journey when you see one flying haphazardly about or finding a spot to plant a patch of milkweed in her spirit somewhere to increase the Monarch butterfly habitat that is currently threatened would also be a great way to keep Arlene’s spirit alive and make a difference for future generations of Monarch butterflies.

It also can’t be left out that a special thank you should go to Barb Asher and Unity Hospice. Barb Asher donated her time to be Arlene’s patient advocate during her 14-month long illness with pancreatic cancer. Her professional knowledge, personal experience and active participation in helping the family navigate the medical world surrounding Arlene’s illness was truly appreciated. Unity Hospice was especially helpful with their caregiving efforts. They guided the Peterson family the best way possible so Arlene’s family could bring her to a place of peace.

Huehns Funeral Home, Inc. & Door County Crematory LLC in Sturgeon Bay are assisting the Peterson family.  Expressions of sympathy, memories, and photos of Arlene can be shared through her tribute page at www.huehnsfuneralhome.com.