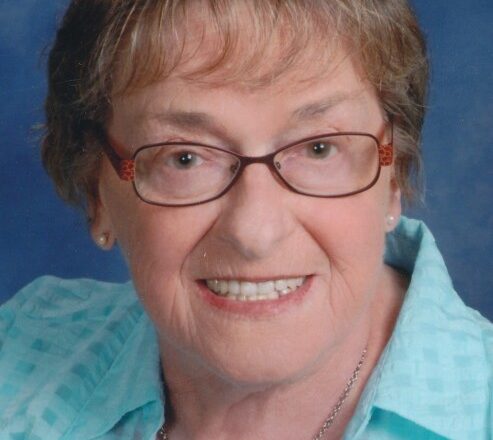 Arlene Mae Champeau, 89, died January 7, 2021, fifteen years to the day of the passing of her childhood sweetheart and husband, Jack Champeau.

Arlene was born December 15, 1931, in Baileys Harbor, to Ethel (Root) and Joseph Kwaterski. She was the baby of the family, with six siblings. Shortly after her birth, the tiny Arlene was wrapped in cotton and kept “incubated” in the family’s farmhouse oven. Although she never topped 5 feet, Arlene proved to be a big presence in the lives of her family, friends and community. Neighborhood “kids” still call her their second Mom.

Arlene graduated from Gibraltar High School in 1949. She and Jack were married soon after, at St. Rosalia’s in Sister Bay, and went on to have eight children. They attended every event the kids participated in, including church events, swimming lessons, band concerts and sports. Arlene stayed active in her community, serving on the St. Rosalia’s Sodality and offering communion. She was a Cub Scout Den Mother and caregiver to her own parents. Bargains Unlimited proved to be a good fit for her retirement energy, as she could be found selling jewelry there, with her ever-present smile and enthusiasm.

Arlene worked at Al Johnson’s Swedish Restaurant and Butik for many years. Most of her children worked there as well.

She and Jack, along with Jim and Joan Champeau, started Champeau Floor Covering. She was instrumental in the creation and success of the business, and was directly involved in the daily operations. Her business savvy and involvement in sales were an integral part of the success of the company.

Arlene was an avid golfer, winning many awards and tournaments, including a hole-in-one! She was an avid Green Bay Packers fan, never missing a game and always cheering them on.

She resided at Scandia Village Good Samaritan for the past dozen years, where she was well taken care of by the angels at Woodview: Tom, Cassie, Cory, Bonnie, Dolly, Elena, Carmen, Emily, Gayle, and others (you know who you are!)

A Memorial Mass of Christian Burial will be held at 11:00 a.m., January 20, 2021 at Stella Maris Parish–Sister Bay site with Fr. Tom Farrell officiating. Due to Covid-19 restrictions, only family and close friends are asked to attend. Burial will follow at St. Rosalia’s Cemetery.

Casperson Funeral Home is assisting the Champeau family. Expressions of sympathy, memories, and photos of Arlene may be shared with her family through her tribute page at www.caspersonfuneralhome.com.