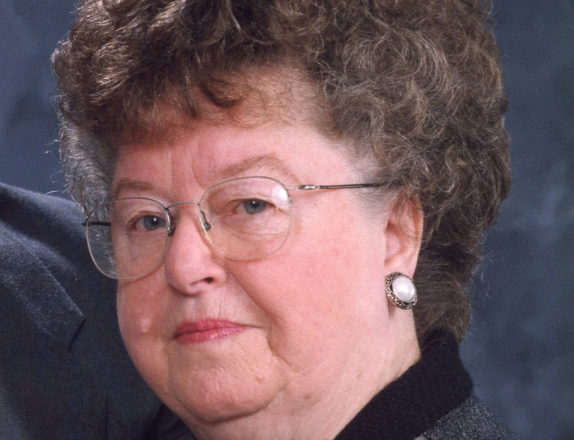 Audrey Emma Alberts, died peacefully on Friday, January 7, 2022, in Green Bay with her sons by her side.

She was born on February 21, 1929, in West Allis, WI, the second child of Walter and Alvina (Benedickson) Miller.  She moved to Door County with her parents at an early age to the farm in Forestville and graduated from high school in 1947. Audrey was swept off her feet by Dennis Alberts, and they were married on November 6, 1948, at Tanum-Forest Lutheran Church in Forestville.  They were blessed with two sons, Gary and David, and they enjoyed many years gardening attending sporting events, and actively participating in the lives of her children and grandchildren.

Her life revolved around her family and God. Many Christmas celebrations were centered around the family dinner table at their home in Forestville, complete with visits by Santa!  Making lefse and quilting at Tanum-Forest Lutheran Church, painting, and attending craft shows were only a few of the things that brought her joy.  A deck of cards (new) was never far away, and she could hold up her end of the table in sheepshead (despite what Dennis thought!). She worked at Emerson Motor Company in Sturgeon Bay until her retirement, and after Dennis’ passing in 2009 moved to Sister Bay for a time to be closer to family prior to relocating to Green Bay.

She was preceded in death by her husband Dennis, parents, her brother Jim and his wife Joyce, and brothers-in-law Arnie Destree and Eddie Schwartz.  Audrey lives on in the hearts of her sons, Gary (Kathy), and Dave (Anne), and her grandchildren, Jamie, Ben, Jordan, Tim, Emma, and Olivia.  She also survived by 5 great grandchildren, Jeffrey, Allison, Ashley, Marcus, and Cece; two sisters, Joyce Destree and Pat Schwartz; a brother, Knudt Miller, Milton, WI; and extended family.  We will remember her gentle ways, kindness, and compassion.

Special thanks to Pam Miller, and her caregivers at Helping Hearts Assisted Living in Luxemburg, and Care for All Ages in Green Bay.  Forbes Funeral Home in Sturgeon Bay is assisting the family with arrangements, and memorials in her name may be given to Tanum-Forest Evangelical Luther Church at 6102 County Hwy. OO in Sturgeon Bay, WI 54235.  Expressions of sympathy, memories, and photos of Audrey can be made at forbesfuneralhome.com.  She will be laid to rest next to Dennis at the Nicolet Memorial Gardens on Bay Settlement Road in Green Bay with immediate family only, and a celebration of her life in planned to for summer of 2022.