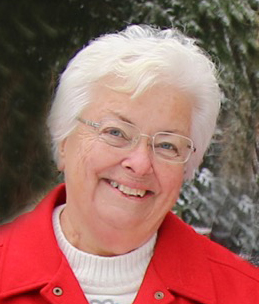 Barbara M. (Tagge) Asher, of Sturgeon Bay, died on July 30, 2020 at the age of 77.  Barb was born November 3, 1942, in Green Bay to Roger Tagge and Agnes (Kustka) Tagge.  She graduated from Sturgeon Bay High School in 1960. Barb went on to earn her Professional Nursing Diploma from Walther Memorial Hospital in Chicago, IL in 1963.

Barbara grew up at the Tagge Tavern (now the Stage Road Inn) as an only child and attended school in a one room school until high school. She played in the apple and cherry orchards and helped her mother in the dining room of the Tavern, and years after the Tavern has enjoyed new owners, it’s remained a beloved meeting place for the Asher family.

Barb met Ken Asher in high school and they began dating in 1961. On November 2, 1963, they married in Sturgeon Bay and remained happily together for 47 years until his death in 2010.  They have two children, Jill and Scott.

Barb began her career in nursing in 1963 at St. Vincent Hospital in Green Bay as a Staff Nurse. In 1965 she and Ken moved to Eau Claire so Ken could attend the University and she worked at Luther Hospital as an intensive care and coronary care nurse, and was also an instructor for the pilot cardio pulmonary resuscitation (CPR) program for hospital personnel. In 1968, Barb and Ken moved to Madison beginning a 13-year career at St. Mary’s Hospital, including developing a hospital-wide CPR Program which included the Physician CPR program and Family CPR program.

Barb changed her focus in 1981 and began an administrative career at Outpatient Rehabilitation Services which allowed her to spend more time with her children.

In 1991 Barb and Ken moved to Green Bay where she became a medical case manager, finding a new passion helping people navigate the medical care system and being a patient advocate. In 2005, Barb and Ken built their dream home on Barb’s family land on South Lake Michigan Drive in Sturgeon Bay, where she continued her role in medical case management until her retirement in 2018. Even after retirement, she never left her job behind completely, always helping friends and family members as a patient advocate up until her death.

She was a vibrant force in every community she was part of, always bringing people together. Whether it was leading her daughter’s Girl Scout troop, helping organize the Middleton Good Neighbor Festival, involvement with the Madison Coast Guard Auxiliary or forming and maintaining the South Lake Michigan Drive Association, she always had time to get involved and help others.  Barb exuded confidence and would accomplish whatever she put her mind to, she was a positive force and always encouraged others to succeed.

Even after all of those accomplishments, Barb would say her greatest achievement and passion was her family. As an only child, she loved being part of the Asher Family and thought of Ken’s siblings as her own, always enjoying a very close relationship to her nieces and nephews. She was a loving mother, devoted wife, doting grandmother, and loyal friend – always available to those who needed her.

Burial will be in Bayside Cemetery at a later date.

In lieu of flowers, a memorial fund has been established in Barb’s name.