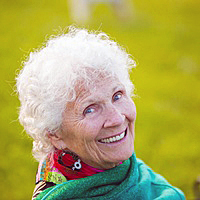 Barbara Joyce Christensen was born Jan. 10, 1933 in Kewaunee to Erma (nee Foss) and Truman Christensen. After her parents divorced, Barbara was raised on Washington Island by her mother with the help of her grandfather, Matthew Foss and later, her stepfather Conrad Andersen. She married Raymond Hansen April 8, 1948. They were blessed with 67 years together, eight children, 20 grandchildren, and four great-grandchildren (with two more on the way). She was a lifelong member of Trinity Lutheran Church and with the exception of a couple of years lived her whole life on the Island.

Barbara loved color and beauty and was wonderfully daring in her choice of clothing, accessories and home decor. She had a flair and gift for how to “throw” things together whether it was an outfit, flower bouquet or holiday decorations. Many who watched Barbara “in action” were awed by her ability to cook and bake delicious food without the aid of recipes, measuring spoons or cups. She cooked wonderful meals for thousands of people during her lifetime, and opened her home and holiday gatherings to newcomers and others who may have otherwise been alone.

At age 13, Barbara drove herself to Roger Gunnerson’s to get her driver’s license. She loved the independence driving gave her and its ability to keep her close to family and friends, offering them help when needed. In addition to her role as a mother, homemaker and volunteer, Barbara worked as a waitress, potato picker, and Avon representative. She kept books for Hansen Oil, owned and operated the Feather Merchants/Barb’s Boutique, managed Hansen’s Harbor House, and grew gorgeous flowers at Hansen’s Greenhouse.

Through her life, Barbara grew into leadership roles in her family, community, and church. She was a founding member of Island Players and the Washington Island Music Festival.

Barbara was a lifelong learner who was led by the Holy Spirit to seek personal wellness and knowledge in all areas of her life. Due to her abiding faith in God’s love and Jesus Christ as her savior and friend, Barbara was able to journey through many difficult and trying life experiences with grace and dignity including her Alzheimer’s diagnosis.

In the later years, Barbara was very content to live life at a much slower pace, spending time in her beautiful home surrounded by family and her cat, watching the clouds, playing her piano, taking car rides, and attending events at the Red Barn and TPAC.

In lieu of flowers please consider giving memorials to the Red Barn, Trinity Lutheran Church music ministry, Washington Island Music Festival or the Guatemala Medical Resources Partnership (GMRP). A musical tribute and celebration of Barbara’s life will be performed at the TPAC at a date to be announced.