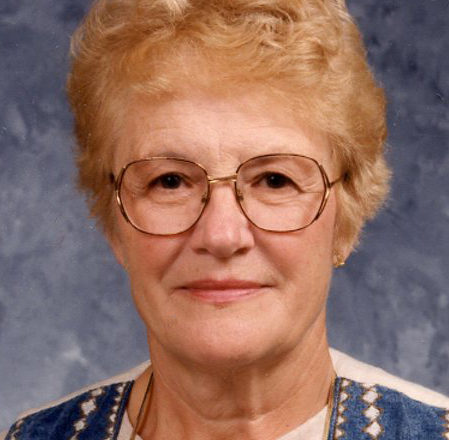 Bernadette M. Moore, 85, of Sturgeon Bay died in Green Bay after a lengthy illness. She was born on a dairy farm in the town of Union in Southern Door County to Harvey and Palmy (Chaudoir) Jeanquart. She attended Fairland Grade School in Namur and Brussels High School through the 12th grade, maintaining a grade A average. During her junior year of high school, she started dating Al Moore Jr., and her role of working on the farm was soon mixed with spending time at the ballpark. Al came from a baseball family, so Bernadette soon learned who played second base as well as the meaning a “rhubarb.”

After high school, Bernadette was employed in the corporate office of Christy Corporation (Shipyard) in Sturgeon Bay. She later married Al at St. Mary of the Snows Catholic Church in Fairland (Namur) on November 15, 1952. Al and Bernadette settled in Namur and raised their family. They shared their home in Namur together for more than 50 years.

Bernadette was a beautiful woman of faith who loved Jesus, her husband, children and grandchildren. Al said, “She was one of the best Belgian cooks you could ask for.” As the children grew up, they spent much of their spare time at Bernadette’s parents’ dairy farm near their home. After the children were all in school, she started working at Marchant’s Foods in Brussels for several years until starting a job at Southern Door High School in the office and as a librarian assistant. Bernadette was employed there for more than 21 years.

Over the years, Al and Bernadette did their share of traveling throughout the U.S. and Canada, Alaska and Western Europe. After retiring, they spent more time with family while still finding time to visit Disney World, enjoy spring-training baseball and vacation in Orlando in the winters. Bernadette was a member of the Belgian American Club, Belgian Heritage Center, St. Mary and St. Francis Parish (where she sang in the choir for many years) and member of the YMCA in Sturgeon Bay. Her favorite place to visit was the Chapel (Shrine) in Champion.

Funeral Services will be 10:30 am Saturday, June 29, at St. Francis and St. Mary Parish, Brussels, the Rev. Edward Looney officiating. Entombment will be in the Shrine of Good Shepherd Mausoleum in Green Bay. Friends may call 3:30-7 pm on Friday at the Forbes Funeral Home in Sturgeon Bay. A prayer service will be conducted at 7 pm Friday at the funeral home. There will be no visitation the morning of the funeral.

A special thanks to everyone at Pinecrest in Sturgeon Bay and Allouez Parkside Village in Green Bay for the great care they provided to Bernadette during the past years.