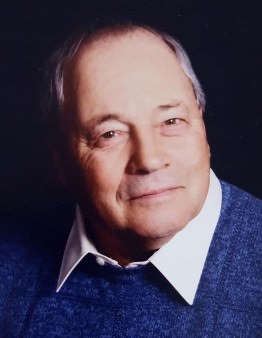 He was born October 6, 1942 in Sturgeon Bay, the son of Bernard Joseph Lienau and Marion Catherine (Schmelzer) Lienau. Bernie grew up attending Corpus Christi Parish and School in Sturgeon Bay where he was baptized, received his first communion, and was confirmed. Growing up right across the street from church, he and his brothers were often called to help serve for Mass when other servers were not available to help during their scheduled Masses. Upon his graduation from Sturgeon Bay High School in 1961, Bernie went on to study at Stout State University (now University of Wisconsin-Stout).

He worked in Sturgeon Bay his entire life, initially at Roen Salvage during the summers he was still in school and then for his dad at Christy Corp. for a short time after returning from Stout. Bernie also worked part-time at Mac’s Sport Shop. His primary employment was with Marine Travelift (as a shipping manager) for 45 years, retiring in 2009. Bernie was currently a part of the staff at St. Joseph Cemetery and helped on many funerals over the years.

On August 9, 1975, he was united in marriage to Christine Marie Duggan, at St. Joseph Catholic Church in Sturgeon Bay. They shared over 41 years of marriage and were currently members of Saints Peter and Paul Parish in Institute. They were best friends and frequent companions as they found many ways to enjoy retirement to the fullest.

Bernie loved being in the woods and was an avid hunter and fisherman. He was a former hunter safety instructor and member of the Door County Rod and Gun Club. Bernie was known for being “one of the best shots in Door County,” usually only needing a few shots to sight in a gun. He volunteered with the local bass tournament and was also a member of the Door County YMCA. Bernie enjoyed cutting wood and playing golf, and in his earlier years, he liked racing motorcycles and was proud to have won the Wisconsin State Championship. Above all, he loved helping family and friends on a daily basis.

He was preceded in death by his parents; parents-in-law, Melvin and Kathryn (Kosnar) Duggan; and his sister-in-law, Carole Lienau.

A Mass of Christian Burial will be held at 11:00 a.m. on Saturday, January 14, 2017 at Saints Peter and Paul Catholic Church in Institute with Fr. Robert Stegmann as celebrant. Bernie will be laid to rest in St. Joseph Cemetery.

Family and friends may call after 4:00 p.m. on Friday, January 13, 2017 at Huehns Funeral Home in Sturgeon Bay until the closing parish wake service at 7:00 p.m. Visitation will continue at Saints Peter and Paul Catholic Church, Saturday morning, from 10:00 a.m. until the time of Mass.

Memorials may be given in Bernie’s memory for Saints Peter and Paul Parish.

Condolences and memories may be shared with Bernie’s family at www.huehnsfuneralhome.com.