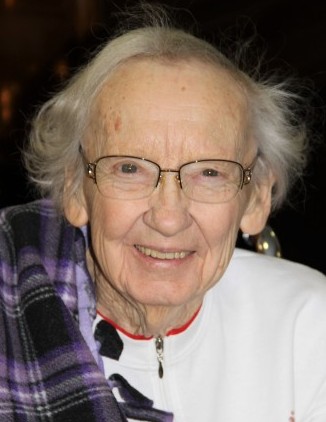 She was born in Sturgeon Bay, the daughter of the late Eric and Elda (Nelson) Peterson. Bernice graduated from Gibraltar High School in 1943. On January 21, 1950, she was united in marriage to Willard Axel Sunstrom at Mayfair Church in Chicago. They were blessed with over 65 years of marriage. Willard died November 4, 2015.

Together, Bernice and Willard owned and operated the Shady Rest Motel in Sister Bay for many years. During that time, Bernice also worked as finance manager for Lamperts in Sister Bay and Berns Brothers prior to that.

She was an active and faithful member of the Sister Bay Moravian Church. Whenever food was needed, Bernice was ready with her church-bazaar coffee cakes and numerous handmade crafts. She loved to create in her crafts, baking, knitting and sewing. Bernice’s favorite pastimes were fishing, playing sports, card games, and she usually had two or three puzzles going at any given time. Overall, Bernice was a role model for her family and her church.

She will be missed by her sons, Gene (Karen) and Gregory (Suzanne), both of Sister Bay; four grandchildren, Nathan (Holly) of Appleton, Tavia (Carston) Lundquist of Minneapolis, Eric (Janna) of Menomonee Falls, and Claire (Tanner) Pinney of Holland, Michigan; and seven great-grandchildren, Tyler and Isaac Sunstrom, Freja Lundquist, Will and Mack Sunstrom, and Silas and Jens Pinney.

Bernice was preceded in death by her parents, Eric and Elda Peterson; husband, Willard; and two sisters, Verda Seiler and Lou Ellis.

Arrangements are pending for her life to be honored with a memorial service held at the Sister Bay Moravian Church.

Burial will be in the church cemetery.

In lieu of flowers, memorials may be given in Bernice’s memory for the Sister Bay Moravian Church.

Casperson Funeral Home and Cremation Services in Sister Bay is assisting the Sunstrom family with arrangements. Expressions of sympathy, memories and photos of Bernice may be shared through her tribute page at caspersonfuneralhome.com.