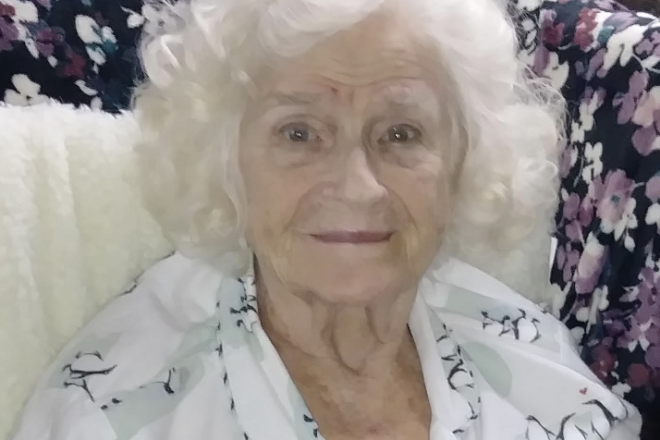 Betty Marie Frank, 96, of Davenport, Iowa, died peacefully at home with hospice, son Bill and daughter Lisa at her side.

Betty was born in Davenport, the only child to her parents William and Fern Bannon. She was a graduate of St. Katherine’s School and later graduated from the University of Arizona, esteemed Phi Beta Kappa in 1946. While attending school in Tuscon, she was a member of Kappa Kappa Gamma sorority of which she was a lifelong sister and continued to attend meetings throughout her long and joyous life.

Betty married Harry Joseph “Bud” Frank in 1946. They shared a long life of love and devotion until Bud’s passing in 2012. Their marriage produced three beautiful children.

Her favorite place to spend her time was in Ephraim, Door County, Wisconsin at the summer home built by her father in 1929. As an avid reader and passionate bridge player she spent many gorgeous days there filled with these pastimes. Oftentimes you would find her on evening strolls through Ephraim enjoying the infamous sunsets.

Betty enjoyed history, science and art. She was an avid collector of antiquities with which she filled both of her homes with unmatched beauty. She was also an ardent supporter and donator to animal rights organizations such as the ASPCA as well as the Humane Society.

She will be greatly missed by her children, grandchildren and those who had the pleasure of knowing her through the years.

Those left to honor her memory include her children; Cynthia (Frank) and John Reifenrath, Bill and Elaine Frank, and Lisa Frank, as well as by her grandchildren; Katharine (Reifenrath) and Patrick Krier, Peter and Lauren Reifenrath, and Holly Frank and Joe Panushka.

There will be a private family ceremony.