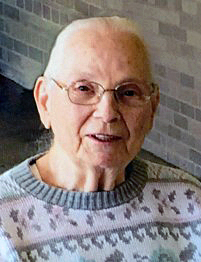 Beverly M. Peil, 85, of Baileys Harbor, died June 15, 2016, at the Skilled Nursing Facility where she had been residing the past two years. She was surrounded by her dear family.

She was born May 21, 1931 in Milwaukee, the daughter of the late Max and Ella (Treptow) Bergemann. After her mother’s death, Beverly was raised by her uncle and aunt, Gilbert and Marge Bergemann.

On December 20, 1947, she married Harold August Peil at Immanuel Lutheran Church in Baileys Harbor. He preceded her in death on November 22, 2004.

Beverly loved her family and enjoyed sewing, crocheting, and putting together puzzles, some of which were framed.

The family would like to extend a special thanks to Ministry Skilled Nursing Facility for the compassion and care given to their mother.

A memorial service will be held at 10:30 a.m. Saturday, July 23, 2016 at Immanuel Lutheran Church in Baileys Harbor with the Rev. Sue Gunderson officiating. Burial will be in the Baileys Harbor Town Cemetery.

Huehns Funeral Home & Cremation Services in Sturgeon Bay is assisting the Peil family. Condolences and guestbook signing may be offered at www.huehnsfuneralhome.com.