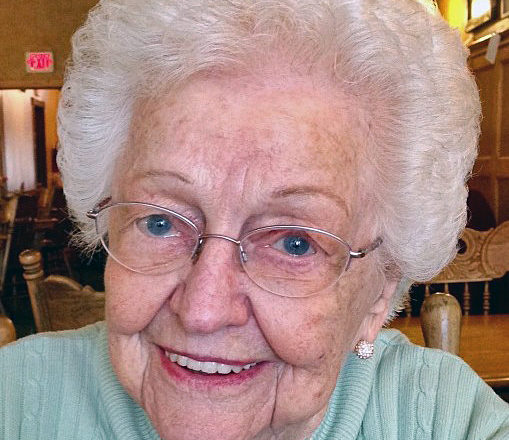 Blanche Idelle (Gunnlaugsson) Jacobson, 97, of Sturgeon Bay, fell asleep in the loving arms of her family and awoke in the arms of the Lord on Saturday, February 17, 2018 at Aurora BayCare Medical Center in Green Bay.

On October 26, 1939, Blanche was united in marriage to Arnold Bennett Jacobson in Valparaiso, IN. They were blessed with six children and over 58 years of marriage. Her beloved husband, Arnold “Jake”, was called Home to the Lord on November 20, 1997.

Blanche cared for others as a nursing assistant at Door County Memorial Hospital in Sturgeon Bay for over eleven years from 1970 until 1981.

She was a wonderful mother, grandmother, and great-grandmother. Blanche always enjoyed cheering her family on at various school and athletic events. First and foremost, in Blanche’s life though, was her love for the Lord. She was a charter member of Bayside Christian Fellowship (now Celebration Church) in Green Bay where her son, Pastor Arni Jacobson, was founding pastor. More recently, Blanche was attending Life Church in De Pere. She was a beautiful, independent, remarkably, uplifting Christian lady who still was driving, and playing a good game of cards with her brother, Orin and friends at the Sturgeon Bay Senior Center.

Blanche’s life will be celebrated with a funeral service Feb. 20, 2018 at Prince of Peace Lutheran Church in Sturgeon Bay with her son and grandson, Pastors Arni and Chad Jacobson, along with Pastor Shawn Hennessy officiating. She will be laid to rest in Bayside Cemetery, beside her husband, Arnold “Jake” Jacobson.

Huehns Funeral Home of Sturgeon Bay is assisting the Jacobson family with arrangements. Expressions of sympathy, memories, and photos of Blanche may be shared with her family through her tribute page at www.huehnsfuneralhome.com.