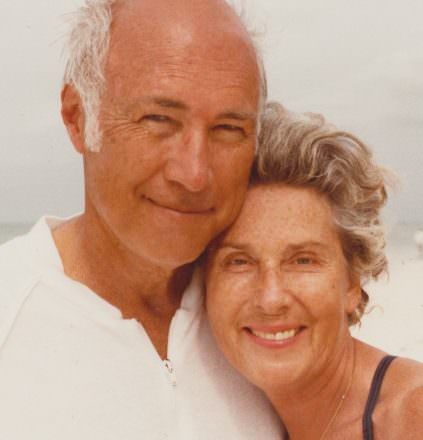 She was born July 29, 1920 in Wimbledon, England, the daughter of the late Harold and Beatrice (Hitchcock) Clarke. When the war broke out, Brenda returned from school in Lauzanne, Switzerland, to join the Women’s Royal Air Force, attaining the rank of Lieutenant. Because she was fluent in German, French and Italian, she was assigned to the Intelligence Unit operating underground at Whitehall, London. Becoming proficient at decoding, Lieutenant Clarke was transferred to Cairo, Egypt to work in Codes and Cyphers against Rommel’s tank offensive in North Africa. There, she met and married Stanford Meigs, a Second Lieutenant in the Army Air Corps, and the son of Merrill C. Meigs, Chicago publisher, pioneer aviator, and Senior Vice-President of the Hearst Corporation. In 1945, the couple and their first child moved to Evanston, Illinois, where Stanford’s family lived. They had two more children, and divorced in 1959.

In 1965, and with Stanford’s blessings, she married his brother, Harmon Meigs, Midwest Division Manager of the Chicago Based Brach’s Candy Company. He died in 1995 in Naples, Florida.

Brenda was supportive of local charity work in the Northshore community, most importantly her thirty years of service on the board of Peacock Camp for Crippled Children.

She is survived by her daughter, Merrilyn “Poodie” (Clay) Bonin of High Cliff in the Town of Naswaupee, Sturgeon Bay, and son, Jonathan (Marietta) Meigs of Pine Plains, NY.

Brenda was preceded in death by her sister, Nora Finch of Devon, England; and daughter, Mavis Ann Waddups.

Interment will take place next to her husband, Harmon, in Mount Hope Cemetery in Illinois.

Huehns Funeral Home & Cremation Services in Sturgeon Bay is assisting with arrangements. Expressions of sympathy may be shared with Brenda’s family at her tribute page, www.huehnsfuneralhome.com.