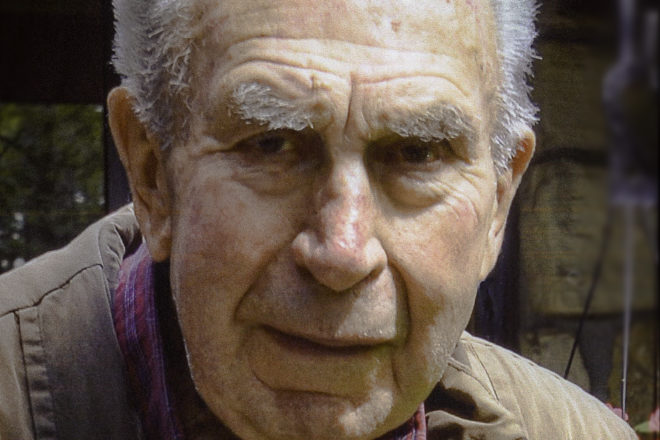 A good and loving man died today, March 16, 2022. Carl Scholz was determined to make the world a better place. Besides his love of family, his love of Door County was evident in all that he did. Education and environmental issues were his passion, he never ceased to teach about the wonders of the natural world. Carl was born on a farm near Waubeka, Wisconsin to Philip and Hattie (Opperman) Scholz on December 15, 1927. At 17, he joined the Army and become a paratrooper and served in the Pacific, spending a year in Japan in the occupation Army. He then went on to graduate from UW Madison. In 1951 Carl became an agriculture teacher at Sevastopol School. After 3 years of teaching, he was asked by the school board to be superintendent. At 26 years old he agreed to take the job for one year—convinced by the board to continue—he went on to earn a master’s degree and 34 years later retired from the Sevastopol School System.

Carl also met his wife Ruth in 1951 in Door County and where they built their life together, never wanting to live anywhere else. They were married in Ruth’s hometown Weyauwega, Wisconsin. Blessed with four children, Marsha (Dana) Lindh, Jane (David) Raben, Jon (Joan) Scholz and Carla Scholz. His pride and joy in his children, his grandchildren, and great-grandchildren were evident in everything he shared with them; a love of education, the natural world, and the simple things in life. Family gatherings were dear to him and Ruth.

Carl often expressed his love for Door County and especially the Sevastopol School community. Education for every child was important to him. He was adept at finding ways to turn non-achieving students into achievers.

In 1965, he and Ruth with three other couples started The Farm, a living museum of rural America. Orv and Sally Schopf were their partners for many years. Eventually, the Scholzs owned The Farm and continued to run it until 2002. The Farm honored his pride in Wisconsin’s heritage and his dedication to education and preserving rural America.

Carl belonged to many environmental organizations. He served on countless boards and never gave up fighting for what was right for the protection of our natural resources. He stood up for many environmental initiatives such as stopping the mines from polluting our rivers, opposing the PCB’s in the Fox River, and developing Whitefish Dunes as a state park. He was influential in many land acquisitions for preservation by The Land Trust. He was on The Ridges board for many years, including serving as president for 15 years. Carl was honored by environmental groups such as Door County Land Trust, Champion of Champions from Lakeshore National Resources Partnership, State Farmer for the FFA, Door County Environmentalist, Governors award for conservation, and many more. Thousands of trees along the canal in Door County were planted under his supervision by the Sevastopol Conservation Club. In the 1960s his creative development of the Sevastopol School EcoLab (an outdoor classroom) without taxpayer money is still an essential resource in the community. He took truckloads of trees to Wisconsin communities that suffered losses from tornadoes. Carl was instrumental in constructing the first Door County sanitary district for Institute and Valmy.

His belief in quality education in all public schools was paramount. When a director of Door County Special Education was needed, he volunteered and did the job for two years. He opposed state negative aid which would have taken tax money from Door County districts and given it to other districts in the state. He often said that the people of the community, the teachers, and the staff at Sevastopol were the best.

In later years, Carl and Ruth enjoyed traveling the world including fulfilling a goal of visiting the city of Sevastopol in Ukraine. With the recent tragic events, he spent hours reviewing photos from that memorable trip. As Carl liked to tell, the word “Sevastopol” means a place of glory. Carl and Ruth have been members of Bay View Lutheran Church for over 60 years.

There is much more that could be told of his accomplishments but already Carl would say, “enough”.

Thank you for the loving care from the angels at Anna’s Healthcare and Unity Hospice.

A celebration of his life is being planned for the warmer months, details will be shared soon.  Forbes Funeral Home is assisting the family.  Online condolences may be offered at www.forbesfuneralhome.com

If you would like to remember Carl by planting a tree, please donate to a local organization like the EcoLab at Sevastopol or any Door County environmental group.