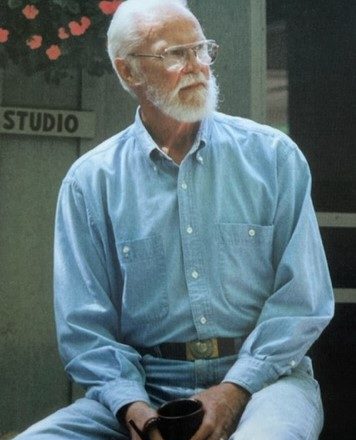 Chick was born in Elgin, Illinois to the late Clarence (“Pete”) and Karin (Wiberg) Peterson, the youngest son with two older brothers, Bob and Dick.  Chick was a graduate of the American Academy of Art in 1949, received his Bachelor of Arts from Marietta College in 1953 before completing his Masters of Fine Arts in 1954 from Ohio University.  He was awarded his PhD Emeritus in 1988 from Marietta College.

Through his service in the Navy during WWII, to teaching in the art departments at both Concord College and Marietta College, to working full time as an artist in Ephraim, Wisconsin, Chick shared his passion for art and community.  He had a deep love of storytelling: through his art, his teaching and his conversations with family and friends.

Chick gained national standing doing illustrations for WoodenBoat, Cruising World and Sail magazines.  He participated in nearly every International Marine Art Exhibition at the Maritime Gallery at Mystic Seaport, winning two Thomas Hoyne Awards, one Museum Purchase Award and being listed among the top ten national painters of signed limited editions consistently through the 1990s.  Russell Jinishian included Chick as among notable maritime painters of the century in his book Bound for Blue Water.  White Door Publishing Co. published two books focused on Chick’s work, Reflections and Of Time and Place (which won Best of Category Award by National Printers Assoc.), with a special focus on his unique watercolor style seen in the “Memory” series.

Those close to Chick know he never really retired; he painted for his entire life, pausing occasionally to go sailing, for a game of Scrabble with Sue, or for a glass of wine at the end of the day.  Chick took great joy in interacting with his family, especially his grandchildren.  He was also a dedicated Door County land preservationist, working often to support the efforts of that mission.

Preceding him in death were his parents, and two brothers, Richard and Robert, as well as many of his brothers and sisters-in-law.

Visitation will be on Friday, June 10th from noon to 2:00 p.m. with a celebration of Chick’s life to follow at 2:00 p.m. CST at Stella Maris Catholic Church in Fish Creek. Pastor Jeff Doane and Rev. Frank Kauzlarich will officiate.  Military honors will follow at the church.  Interment will be in Ephraim Moravian Cemetery at a later date.

In lieu of flowers, memorials may be given in his memory to the Door County Land Trust.

Special thanks to Unity Hospice for their care given to our father in his final days.

Casperson Funeral Home & Cremation Services in Sister Bay is assisting the family. Expressions of sympathy, memories, and photos of Charles may be shared with family through his tribute page at www.caspersonfuneralhome.com.