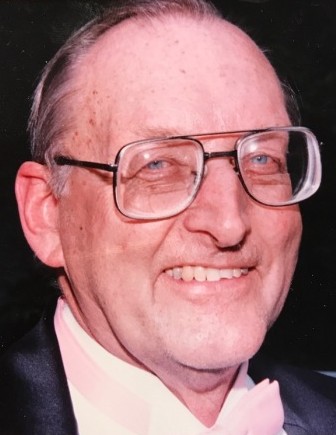 Wes grew up in Wauwatosa, Wisconsin, spending wonderful summers with family and friends on Big Cedar Lake, near West Bend. It was there that his affection for living near the water grew and remained for the rest of his life. He graduated from Carroll College in Waukesha with a bachelor of science degree before spending time as a teacher’s assistant at Northwestern University in Evanston, Illinois.

During World War II, Wes served his country with the 74th United States Army Air Force base unit, entering into active duty on July 26, 1945. He was stationed at Kwajalein Island in the South Pacific, where he worked as a weather observer, administrative assistant and station chief. As part of Task Group 1.5 Weather Central, he monitored the weather during testing for the atomic bomb. He received a letter of commendation for his superior work there by Brigadier General Roger Ramey and was awarded the World War II Victory Medal during his tour of duty. Wes was honorably discharged from military service on Dec. 16, 1946.

After World War II, he enrolled at the University of Wisconsin-Madison and earned his master of science degree in chemistry in 1949. Upon graduation, he was employed by General Electric in New York until he found another opportunity in Wisconsin. He made the long journey from New York nonstop to Cedar Lake, where he arrived in a brand-new, sparkling Buick convertible. It was then that Wes joined a startup chemical products company, Thiem Corporation, in West Allis. He began his career as a laboratory chemist, advancing to plant manager, and finally becoming director of manufacturing. After a dedicated, 40-year career, he retired in 1990.

Wes was a boat enthusiast and loved being on the water. He purchased his first boat, an awesome, classic, wood Chris Craft, which he kept at his parent’s cottage at Cedar Lake as a bachelor. He partnered with a good friend, Keith Franz, and purchased a farm to store his boat. The two of them came upon an antique fire engine, fixed it up and got it running again. That began a longtime hobby of collecting and restoring antique fire engines.

He became chief of the Cedar Lake Volunteer Fire Department, and of course, he owned Dalmatians. Still maintaining his love for the water, he owned two different homes on Pewaukee Lake, and during the summers, he rented cottages in Fish Creek and Ephraim. He went on to purchase a vacation home first on Moravia Street, and finally on Dane Street in Ephraim.

Upon retirement, he and Cookie remodeled the Dane Street house to make it a comfortable, year-round home. During his years in Ephraim, he developed a love of the arts. He was a member of the Birch Creek Music Performance Center in Egg Harbor and was an avid supporter of the arts. He served on the Waste and Water Council. And he was a huge, longtime fan of the Badgers and Packers.

Services that were initially planned for Saturday, April 25, HAVE BEEN POSTPONED UNTIL A DATE TO BE ANNOUNCED through Wes’s tribute page at caspersonfuneralhome.com or by calling Casperson Funeral Home and Cremation Services at 920.854.4123.

Memorials may be given in his memory to Birch Creek Music Performance Center (P.O. Box 230, Egg Harbor, WI 54209-0230 or birchcreek.org/support/give).

Casperson Funeral Home and Cremation Services in Sister Bay is assisting the family. Expressions of sympathy, memories and photos can be shared through his tribute page at caspersonfuneralhome.com.