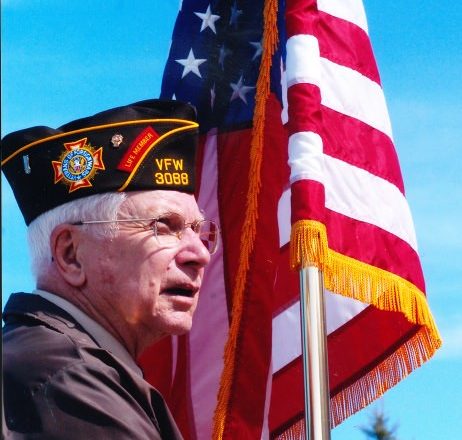 He was born in Fish Creek on the family homestead and graduated from Gibraltar High School in 1943. In 1950, Chet married Esther Peil.

Chet was a proud WWII veteran and lifetime member of VFW Post #3088 and the Weber-Tess AMVETS Post 51, both in Sturgeon Bay. He served with the United States Army from 1944 to 1946 in Germany and Austria and was training for the invasion of Japan.

Chet was the owner of Gauger Heating and Sheetmetal on Egg Harbor Road, serving the Door County community since 1952.

Chet was a member of the nationally recognized AMVETS Drill Team that marched in Washington, D.C., for Kennedy’s inauguration. In his retirement, Chet put more miles on his vehicle than when he was working full time, as he visited shut-ins and veterans who could not get around. Chet served as a trustee for the Sturgeon Bay Moravian Church and was part of the “Hans, Franz and Chet” team at church, fixing anything and everything needed at the church.

In his 70s, Chet took up golfing, and like anything he did, he did it with a passion. He eventually worked his way through three sets of clubs. He also enjoyed dancing with Esther and playing sheepshead with the crew at Happy Hour.

A celebration of life was held Feb. 21 at Sturgeon Bay Moravian Church, with military honors by the United States Army, VFW Post #3088 and the Weber-Tess AMVETS Post 51. Chet was laid to rest in Blossomberg Cemetery in Peninsula State Park in Fish Creek.

“Our heartfelt thanks go out to Dr. Richard Hogan, and the staff at Sturgeon Bay Health Services for their love and support given to Chet and our family.”

Memorial donations may be made in Chet’s memory to the charity of your choice.

Expressions of sympathy, memories and photos of Chet can be shared through his tribute page at www.huehnsfuneralhome.com.