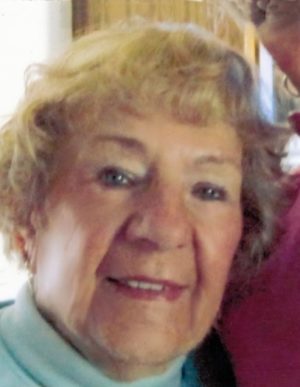 She was some business lady; planned to retire next spring. She and Fritz built the Lull-Abi Motel in Egg Harbor back in ’53. Charged $6 bucks a night back then, moving the kids into the garage in summer to make a few extra bucks. After Fritz died in August of ’74, she married Johnny Vieth, owner of Johnny’s Cottage Restaurant in Sister Bay, sold the motel and went on to become the “Bread Pudding Queen” of Door County. After Johnny passed in May of 2010, she spent the winter at her home in Phoenix, and summers back in Door County, enjoying time with friends and family.

She’s survived by her four kids, five grandchildren, and roughly seven great grandchildren at last count. One brother, Rod, lives somewhere west of the Mississippi, other than that the other twelve and her parents where there Friday morning to welcome her home.

Her family wants to thank the entire staff at Scandia Village for their loving care, with a special thanks to all those working with Unity Hospice. The support they all gave her, while she lived at Scandia Village was “spot-on” and professional. In lieu of flowers, any donations made to Unity Hospice, will be much appreciated by her family.

Sympathy cards can be sent to her at 6419 Barrick Road, Sturgeon Bay, 54235. Her family will make sure she gets them.

Huehns Funeral Home in Sturgeon Bay is assisting the family. Expressions of sympathy, memories and photos of Corrine may be shared with her family through her tribute page at www.huehnsfuneralhome.com.