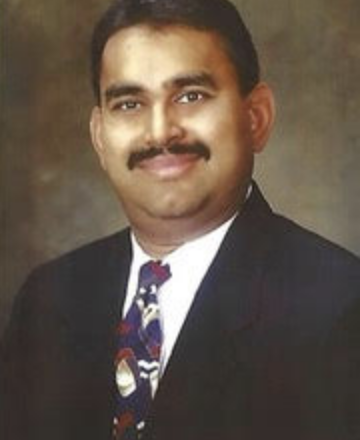 Cpt. Dr. Rajesh Vinod Patel, born Dec 31 1962 passed peacefully from this world on April 17, 2022. Born in India, he immigrated to the U.S. at age four. He spent much of his youth in north Georgia where he attended Stone Mountain High School and earned his Eagle Scout rank. He attended North Georgia College as an active cadet in the United States Army. He went on in service to his country as an active duty military member while attending medical school at West Virginia School of Osteopathic Medicine. He would then serve as Field Surgeon during his time in Delta Force and again while deployed during the Persian Gulf War (Desert Shield Desert Storm). His military decorations included; the Army Commendation Medal, Army Service Ribbon, Kuwait Liberation Medal, National Defense Service Medal, and Southwest Asia Service Medal with two Bronze Service Stars. In 1994 he began a civilian career in Columbus Georgia. He loved to teach and found joy as an attending physician where he taught medical residents.  He instructed and worked in both family practice and emergency medicine.

In 2000 he and his family moved to Washington Island, WI where he had accepted the position of island physician. He would also serve as medical director for the island rescue squad during his tenure. In 2007 he began a private practice in Eufaula, AL, working in both family practice and emergency medicine. Dr. Patel retired in the fall of 2014 and returned to his residence “The Old Potato Farm” on Washington Island WI in 2015.

He had a passion for gardening, woodworking and worm farming. He could often be found on the farm in a pair of overalls digging holes and planting trees or fruit bushes. He loved reading and country music. He attended Bethel Baptist Church and Trinity Lutheran Church. He was a member of the VFW and American Legion.

He was taken from this earth all too soon. He is survived by his loving wife Cathy, their children, Loduska Kirchner NP (Mark Scheibl) and Vilas Patel (Mary).  His parents Vinod and Luxmi Patel, brother Dattu Patel NP (Karen), and numerous nephews, nieces, aunts, uncles, and cousins. He was preceded in death by his maternal and paternal grandparents.  As a final act of service, Dr. Patel made an anatomical gift to the Medical College of Wisconsin, so that he could continue to help educate those entering the field of medicine.

A celebration of life will be held at a future date TBD. In lieu of flowers donations may be made to the Dr. Rajesh V. Patel Medical Education Scholarship, for the purpose of assisting island residents in pursuing opportunities in medical education. Donations can be made at Nicolet National Bank.

Special thanks to the dear friends who supported him during his illness. It was your love and kindness that added so much joy to his life.