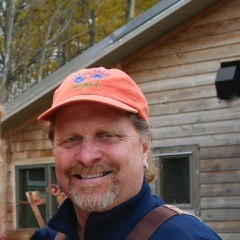 Cy Turnbladh lived life to the fullest of his imagination.  If he could imagine it, he created it.

Cy died peacefully on February 3, 2021 with family members by his side. He was at Froedtert Hospital Milwaukee awaiting a liver transplant.

In 1997 Cy’s mission of making art accessible and fun came to life.  He opened Hands On Art Studio in his apartment connected to his gallery, Spirited Hands, on the corner of Juddville Rd and Hwy 42 in Door County.  He invited people to paint their own pottery.  Cy enjoyed the interaction with the customers, and he saw the joy he could bring people. He knew at that moment he needed to focus and grow this fledgling business.

Two years later he moved off Hwy 42 to an abandoned farm which required courage, lots of drive and extensive remodeling. This move was deemed crazy by many people, but Cy knew he could build a better Hands On with more space for people to enjoy.  He built building after building, adding new projects and creating more fun every year. He was often called “Jack of all trades and Master of fun”.  Customers grew accustomed to Cy in his Carhartt’s, hat and a pencil behind his ear as he constructed buildings and greeted customers.

Cy always considered himself more of a designer than an artist.  He liked designing gallery art, business models, buildings, and a personal home he built a few years ago for himself and his wife Karon.

He was born in New York, New York on February 26, 1952.  Cy, his older sister Kari and parents lived in New Jersey for the first 7 years of his life, then his father accepted a job offer in Minneapolis MN area.  Cy went from “the big city” to a farm in Lake Elmo, MN.  He grew up with art, tractors and beef cattle. The neighboring farmers taught Cy what it meant to work with your hands when he helped them with chores and construction projects. Cy was surrounded by many forms of art in his youth through family, friends and teachers.  He originally dreamed of being an architect but discovered the instant gratification of the potter’s wheel in a class and he loved it. Cy spent hours learning how to create pottery and his love for the arts grew.

He attended University of Minnesota, majoring in ceramics.  He had one year left to complete his degree but was impatient to start his own gallery, he quit school and partnered with his parents in 1972 to open Tamarack Gallery in Stillwater MN.

Cy grew restless again and moved to Door County in 1989. He was drawn to the county by other artists that he met.  He continued designing and creating his own pottery. In 1994 Cy moved from Ellison Bay to Fish Creek to set up a gallery on Hwy 42. He often talked about driving past an abandoned farm on Peninsula Players Road and he could imagine himself building a destination for his gallery and Hands On in the old barn.  In 1999 Cy purchased this old farm, and the magic began.

In 2003 he met his “future wife” at Hands On, Karon Ohm.  She was a customer who came in once or twice a year and they would pick up their conversation where they previously left off.  In 2007 Cy hired Karon’s nephew, Austin Ohm. Cy and Karon’s conversations continued which led to their marriage in 2010. Their love for each other was a living illustration of being soul mates. Cy would tell people, “Love is an action verb.”  They worked, created, laughed, cooked and entertained together. They affectionately called themselves “Bofus”, translation, both of us.  Staff at Hands On had to endure the call outs of “Honey Bear’s” and “Sweetie B’s” but that’s how this couple worked together, reminding themselves of the sweetness in life.

A fund has been established to honor Cy’s love of animals, especially kitties.  The fund is for the Door County Campus – Wisconsin Humane Society.  Donations can be made via Facebook https://www.facebook.com/donate/453313345863683/. For additional ways to donate to the WHS, email Hands On [email protected]  or donate by mail 3655 Peninsula Players Road Fish Creek WI  54212. Checks should be made payable to Wisconsin Humane Society (WHS) A private memorial is currently being planned. Hands On will plan a public remembrance of Cy as soon as COVID-19 allows.

“I’m not a visionary,” Cy said. “I’m one of those stream-of-consciousness thinkers. I just thought, why wouldn’t people want to come and make stuff? Who doesn’t want to do that?”