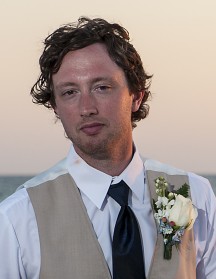 David John Buhk, 31, of Sturgeon Bay, died August 14, 2020 while at his home. He was born July 30, 1989 in Milwaukee, the son of John and Chris Buhk. David was baptized at St. Michael’s Catholic Church in Jacksonport (now Stella Maris Parish-Jacksonport site). He attended Sturgeon Bay High School and enjoyed playing football for the Clippers. David was a graduate of the SBHS class of 2007. He worked various jobs initially after high school before going to work for N.E.W. Industries in Sturgeon Bay where he was a machinist, nearly the past eight years.

David married Jolene Stacy Jauquet, whom he had been friends with since high school, on November 4, 2016 at St. Pete Beach, Florida. Together, they resided in Sturgeon Bay.

David liked smoking meat, especially ribs with cherry wood. He was so good that people were always dropping by his house with meat for him to smoke. David loved the game of football ever since he was a kid – playing at home in the street with family and friends early on and then on the team in high school, but also cheering on the Green Bay Packers. David enjoyed being outdoors in nature – going for walks on Door County Land Trust properties, among others. He also liked to visit Washington Island. Christmas was his favorite holiday of the year. He would start asking in October to put the Christmas tree up and wouldn’t take it down until February (at the soonest). David loved listening to Christmas music throughout the year. His passion for music extended beyond Christmas music, though, as loved going to Summerfest in Milwaukee and listening to the various bands and artists there.

Visitation for family and friends will be held OUTSIDE (the west entrance/carport of) Huehns Funeral Home in Sturgeon Bay beginning at 10:00 a.m. on Saturday, August 22, 2020 and continue until 12:50 p.m. with a (public) sharing of memories of David’s life at 1:00 p.m. Those attending the visitation and/or sharing of memories are to wear face masks and maintain social distancing.

David will be laid to rest beside his sister; grandfather; and uncle in St. Michael’s Catholic Cemetery in Jacksonport immediately following the sharing of memories at the funeral home.

Expressions of sympathy, memories, and photos of David may be shared with his family