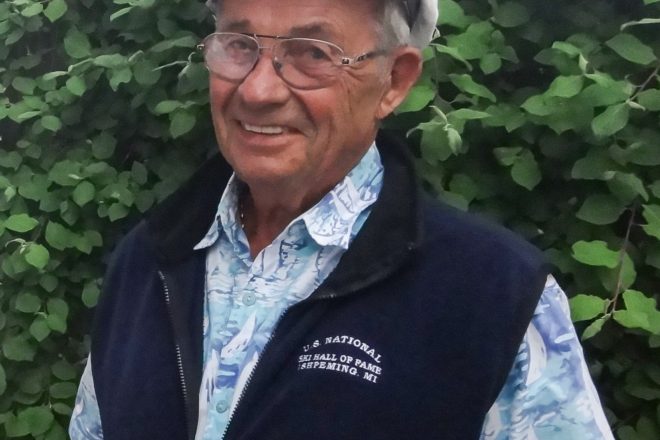 David was born March 29, 1935 to the son of the late Wallace and Gladys Weborg. David graduated from Gibraltar High School in Fish Creek in 1953. On January 26, 1957, David and Else Margit Fromm were united in marriage.

While he grew up in a family of commercial fishermen, David became a skilled carpenter. Influenced by the works of Frank Lloyd Wright, he began his business, Weborg Builders, at a young age. Later, he and Else purchased a historic building in Appleton, turning it into multiple retail spaces called the Castle Shops. Within it, they ran a store where they proudly sold Scandinavian furniture and gifts, which they named The Little Mermaid, after the famous sculpture in Copenhagen, Denmark. Although David lived in Wisconsin for all of his 86 years, he and his wife loved to travel the world and often took trips to Scandinavia, seeking out products to sell in their store during their trips.

After retiring from retail, David and Else opened a bed and breakfast in Door County named the Harbor House Inn. David again put his carpentry skills to work and remodeled a historic Victorian house and ‘Troll Cottage’. The couple’s fondness for lighthouses inspired him to build one as part of their new business. It has become such an iconic part of the tourist destination that it’s been photographed by many visitors, even causing the occasional traffic jam. Those who stayed at the inn would remember David’s affable nature, talking with the guests and telling many stories, all the while wearing his signature fisherman’s cap and pipe.

David and Else were members of Bethel Baptist Church in Ellison Bay. Following the devastation of Hurricane Hugo in 1989, they volunteered to help rebuild churches in St. Croix, USVI. They fell in love with the island and later bought land there, and David built a beautiful home overlooking Buck Island, where they enjoyed Caribbean winters.

When David was 16, he met Else, a 14-year-old girl who had recently emigrated from the little town of Viborg, Denmark. David always said their love was meant to be, since his last name matched the name of the town his future bride was from. It didn’t take long before they became inseparable. Little did those teen sweethearts know, they would celebrate over 64 wedding anniversaries.

One of David’s greatest gifts to Else was building her a house modeled after the Danish farmhouse shown on the blue tin of the butter cookies she so dearly loved. David proudly displayed one of the tins in his garage.

In his younger years, David enjoyed competitive ski jumping and scuba diving. Most of the treasures that David found at the bottom of Lake Michigan are proudly displayed in his yard or on display in the Death’s Door Maritime Museum. As he got older, David liked downhill skiing, sailing, and was always working on a home project. His latest creation was a plumbed outdoor water feature.

David also had an uncanny ability to befriend animals, in particular, dogs. The surliest pup would always wag its tail whenever David was nearby. He loved to travel with his wife and always found peace and relaxation sitting with her on a hotel room balcony, smoking his pipe, watching and smiling at people walking by in cities near and far.

Private services will be held in honor of David’s life. He will be laid to rest in the Ellison Bay Cemetery.

Casperson Funeral Home & Cremation Services of Sister Bay is assisting the Weborg family. Expressions of sympathy, memories, and photos of David may be shared with his family through his tribute page at www.caspersonfuneralhome.com.