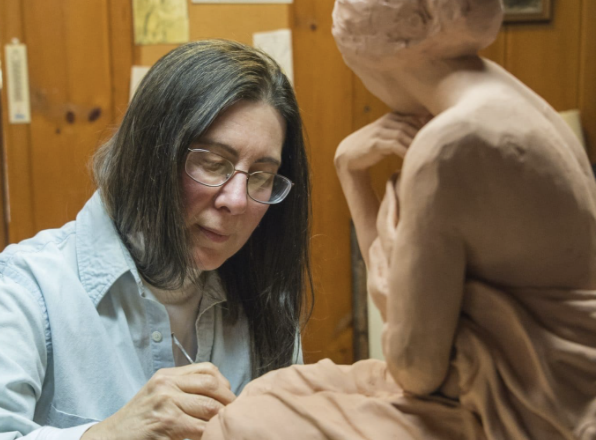 Deb Dendler died Sept. 23 after a long battle with breast cancer, two days before what would have been her 70th birthday. She was born in Chicago in 1950 to Inez (Bon) Burrows and John Wenner, the middle of three daughters. Her family moved frequently and eventually settled in a suburb of New York City. She was passionate about (and talented in) the visual arts, poetry and dancing and had drawn and painted all her life. Deb trained in both painting and sculpture at the Pennsylvania Academy of Fine Arts.

She moved to Door County, Wisconsin in 1979, married, and had two children. She raised them as a single mom after a divorce. She made sculpture, worked at local restaurants, taught at the Peninsula School of Art, completed her bachelor’s degree, and was an active member of the Moravian community.

Deb reconnected with Kalman Reti, a lifelong friend, in 1996. Deb and Kalman moved to Newton, MA that summer. She returned to Wisconsin in the summer to sculpt and work. Deb and Kalman were married in 2019.

Deb was immensely proud of her children and took great joy in spending time with them and her grandchildren. In spite of numerous trials, such as her sister’s death from cancer, one granddaughter’s successful battle with leukemia, and multiple recurrences of her own cancer, she remained hopeful and optimistic. She left the world a finer, more beautiful place than she found it.

She was preceded in death by her parents and her older sister Judy. She is survived by her husband Kalman Reti, her son Tony (Amanda) Burrows, daughter Megan Dendler, grandchildren Ada, Emma, William, Charlie, and Mia, her sister Elizabeth Block, and many nieces and nephews.

There will be a virtual remembrance on 10/04, please email [email protected] to indicate interest and receive details. To appreciate some of Deb’s artwork, you can visit her webpage at Deb Dendler Art.