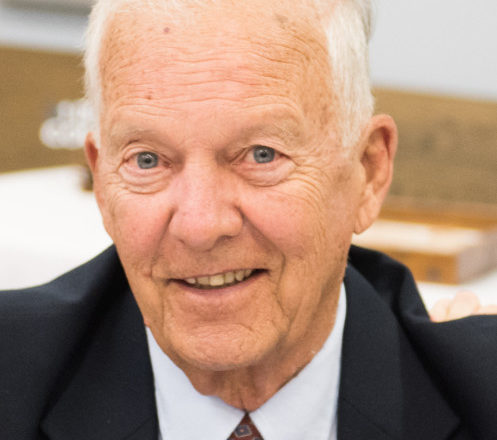 Dennis Duebner, loving husband, father, grandfather, and friend died May 10, 2022 in Sturgeon Bay, Wisconsin. He was 86.

Denny was born on August 31, 1935 in Manitowoc, Wisconsin to Delilah and Harold Duebner. As a grade schooler, he loved to play softball and basketball with his friends even in the snow and cold. He attended Lincoln High School where he excelled at playing tennis on three Fox River Valley championship teams and served as Senior Class President. He graduated with a degree in marketing from the University of Wisconsin at Madison in 1957.

After serving in active duty in the Army for six months, he was hired by the Kohler Company in the spring of 1958. He married his high school sweetheart, Janet Nelesen, on January 31, 1959 shortly after she graduated from the University of Wisconsin. Denny was a sales trainee in Kohler, Wisconsin until September of 1960 when he moved to Long Island, New York to manage his new sales territory which included the Borough of Queens, and Nassau and Suffolk Counties.

Sales was a natural fit for Denny and he was promoted to Assistant Manager of the New York branch in 1967. Three years later, he was transferred to Minneapolis and promoted to Manager of the Minneapolis Branch which included five states. Denny enjoyed his job. He liked to travel to different cities to call on customers, while at the same time seeing our beautiful country. He always told his children, “nothing happens until the sale is made.” His entire nearly forty-year career was spent with the Kohler Company.

Denny was an engaging public speaker and he credited Toastmasters with helping him to develop those skills. Also, while living in the Twin Cities, he was a member of the Minneapolis Downtown Kiwanis Club and later the Southwest Kiwanis Club.

In early 1998 after Denny retired, he and Janet left Minnesota winters and started spending half the year in Naples, Florida and half in Sturgeon Bay, Wisconsin. They made many new beloved friends in retirement and enjoyed frequent visits from family and friends to their new homes. Janet and Denny loved to travel to Europe, Denny especially loved Germany and Austria, or to visit friends, children and grandchildren, especially if they could attend a baptism, confirmation, graduation or sporting event.

Somewhat surprisingly, Denny enjoyed motorcycling which he did until he was 79. He shared this interest with his son David and at least one grandson. He loved working in his yard and could be seen most days walking the property in Sturgeon Bay and eventually ending up at the beach. The cottage in Sturgeon Bay was a very special place for him. He had been visiting Door County since the 1950s. Having grown up in Wisconsin, Denny was a big Green Bay Packers and University of Wisconsin Badgers fan.

Over the years he focused his volunteer actives on the church – doing the Lord’s work. At Golden Valley Lutheran in Minnesota, he served as President, Elder, reader, usher and committee person. He felt we are here on Earth to spread the Good News of Jesus Christ as our Lord and Savior. He was also active at Faith Lutheran Church in Naples where he served on the Stewardship and Endowment Committees. Denny joined the Gideons in his early 70s and felt blessed to be serving this great Christian ministry.

In lieu of flowers, the family suggests that gifts be made to the Gideons International – Faith Fund, P.O. Box 140800, Nashville, TN 37214 or https://gideons.org/donate. All gifts will be used to purchase Bibles for distribution.

Huehns Funeral Home of Sturgeon Bay is assisting the Duebner family. Expressions of sympathy, memories, and photos of Denny may be shared with his family through his tribute page at www.huehnsfuneralhome.com.