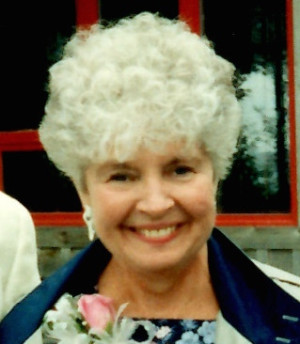 Diane Lee Stracka, 81, of the town of Sevastopol in Sturgeon Bay, WI, died Monday, September 21, 2015, in the comfort of her home.

She was born May 13, 1934, in Hartford, WI, the daughter of the late Leland Peter and Nina Joyce (Mann) Gehl. Diane graduated from Hartford High School in 1952. She received a music scholarship to attend the University of Wisconsin-Madison and played clarinet in the marching band. Diane graduated with a bachelor’s degree in elementary education and a minor in music. Later that summer, she married her childhood friend, high school and college sweetheart, Robert William Stracka, at St. Kilian Parish in Hartford on August 18, 1956. They were blessed with nearly 59 years of marriage and over 68 years of friendship. Bobby preceded Diane in death on July 10, 2015.

After college, Diane taught early elementary school in Columbus, WI, before she and Bob moved to Rockford, IL, where they started their family. Diane went back to teaching in Rockford in 1978 and taught for 10 years.

In 1996, she and Bob moved to Door County, WI, making their home on Clark Lake, a property Diane’s parents had purchased in 1958. Bob began building the family cottage in 1958, completing additions and improvements over the years.

She was currently the president of the Christ Child Society in Door County and had knitted many little caps for babies over the years. Diane volunteered at St. Joseph Parochial School in Sturgeon Bay, teaching art in the classroom. She also volunteered at the Miller Art Museum in Sturgeon Bay. Diane gave tours of the hospital to children and taught classes for young mothers, helping to prevent shaken baby syndrome. She had a passion for reading and also volunteered at the book store at Whitefish Bay in Door County. Diane loved cross-country skiing and felt at home when she was in the water swimming. She had an appreciation for birds and nature, and enjoyed watching the mergansers swimming. The blue herons were even there in tribute on Monday when she passed away.

She is reunited with her parents; husband, Bobby; infant brother; and close friend, Stella Rankin.

A memorial Mass of Christian Burial will be celebrated at 12:00 noon, Saturday, September 26, 2015, at Saints Peter and Paul Catholic Church in Institute (4767 Dunn Rd., Sturgeon Bay, WI 54235) with Fr. Anthony Birdsall as celebrant. The Rosary will be prayed at church at 9:45 a.m., Saturday morning, with visitation continuing from 10:00 a.m. until Mass.

Diane will be laid to rest beside her best friend and husband, Bobby, in St. Michael’s Catholic Cemetery in Jacksonport, WI.