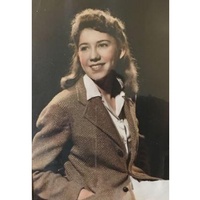 Donabelle Mae Pritchett, 94, of Sister Bay died peacefully on the morning of Aug. 18, 2017. Her children and husband were by her side when she passed away in Scandia Village, Sister Bay.

Dona was born on her family farm in Sister Bay in 1922 and attended Appleport school in Liberty Grove. At age 11 Dona accepted Jesus Christ as her savior and God and joined the First Baptist Church of Sister Bay. She graduated from Gibraltar High School in 1940. In 1941 she met her husband, Tom, on a blind date while Dona was studying art at Milwaukee State Teachers College, and within 30 days she had invited Tom to Door County to meet her parents and their futures were destined to be together. The couple celebrated their 74th wedding anniversary this past July.

Dona and Tom had a great life together living around the world and the United States for 74 years after their marriage.

In 1944, Dona with friends and cousins, left Door County to work in Seattle during World War II. Dona was selected to work in the art department at Boeing for the remainder of the war effort. After the war she and her husband returned to Wisconsin, and started a family and had three children when her husband was called to duty for the Korean war in 1951. In 1953, Dona and her children joined Tom in Japan for 2 years. Dona was among the first group of Westerners ever to visit the sacred grounds of the Japanese Imperial Palace. The family then moved to Seattle where Tom was reassigned, there, Dona continued to display her artistic abilities through the remodeling of their home and they celebrated the birth of their fourth child. Over the next 15 years, Dona and her family lived in Germany for six years and returned to Door County to be with family and friends as frequently as possible

Dona had a lifelong love for art and was an accomplished painter and designer. She taught art design at a college in the Chicago suburbs during the 1970s. In the 80s, Dona and her husband moved to Dayton Ohio and she became the renowned Antique Country Americana and Quilt Dealer known as “The Ohio Connection”. She loved traveling to Europe with friends and family and discovering beautiful antique fabrics.

In 2000 Dona and Tom moved back to Sister Bay in Door County permanently and remodeled the family farm first built by her grandfather Daniel Hedeen in 1890. The farm was featured In “Our Wisconsin” magazine.

Friends and family are invited to a memorial service at the first Baptist Church of Sister Bay on Monday August 28 at 2 pm. The service followed by light refreshments will be preceded at 1 pm with a visitation.

In lieu of flowers donations may be made to DOOR CANcer Inc, or Scandia Village Capital Campaign.