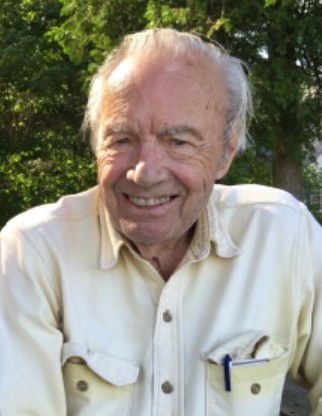 His 99th birthday cards were on the way when Donald Charles Cushman died swiftly from complications of heart failure on May 14, 2020. He embraced his long life with enthusiasm, filling it with family, friends, a satisfying career, outdoor recreation, and two great loves.

Born in Evanston, IL on May 18, 1921, Don was the middle of five children. He and his mother shared a birthday, and she had his number in other ways. When commotion broke out in the children’s bedrooms, she usually called up the stairs, “Stop it, Donnie.”

Don attended New Trier High School in Winnetka, where he excelled in track and got by in class. At Colorado College he ran the mile and performed in campus singing groups. By his senior year, he realized studying could be almost as much fun.

The 1943 yearbook shows him with a grin on his face every time his photo appears, even though he was headed to war. After graduation, Don entered the US Naval Midshipmen School at Columbia University in NYC. He was then stationed at the Yorktown Mine Warfare School in Virginia. On a blind date, he met Marilyn Kay Wood, a student at the College of William and Mary.

By the time he headed to the Pacific on the minesweeper YMS-365, Don and Marilyn had an understanding, and it served them well for more than 55 years. He earned a Purple Heart when his ship was blown up off the coast of Borneo in June of 1945.

The young couple and their growing family enjoyed enduring friendships with other outdoorsy families, many from Union Congregational Church in Green Bay. After Don’s retirement from Fort Howard in 1978, he and Marilyn moved to Sturgeon Bay and started an Athlete’s Foot store downtown, which they owned and ran for five years.

After Marilyn’s death in 2002, Don began courting family friend Marion Auman. She became the second great love of his life. They married in 2004, when he was a robust 82, and enjoyed 15 years together in Marion’s home north of Algoma, a small stone’s throw from the wild shore of Lake Michigan.

Don devoted himself to Marion’s happiness, and she to his. Though they traveled to Italy, New Mexico, and Florida, they liked most to be at home, taking turns cooking and telling stories.

Marion and Don moved to the Skilled Nursing Facility at Door County Medical Center during the past year. The Cushman family thanks the SNF staff for their excellent and compassionate care. We also appreciate the dedicated caregivers from Home Instead, who made it possible for Don to stay at home until he was ready to move.

Memorials are preferred to Feed and Clothe My People, the Maritime Museum, and the Land Trust, all in Door County. The family will host a Celebration of Life later in the year. In the meantime, here is some of Don’s advice as we learn to live without him.

And think twice before doing something stupid.

Huehns Funeral Home, Inc. & Door County Crematory LLC are assisting the Cushman family. Expressions of sympathy, memories, and photos of Donald may be shared with his family through his tribute page at www.huehnsfuneralhome.com.