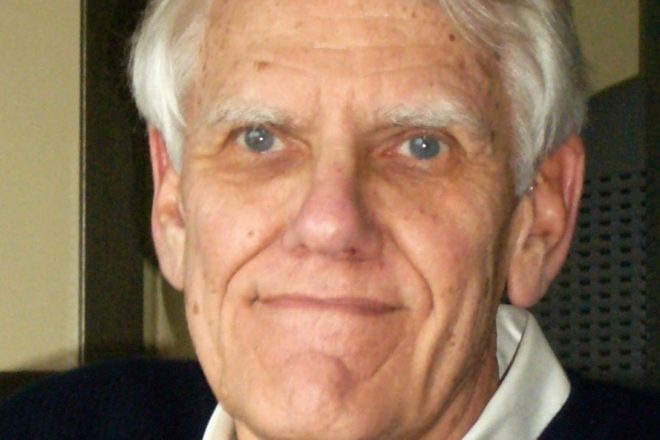 Donald Polzin died on September 14th of his 92nd year. He entered home hospice care in April and was cared for by his wife Jacquie and son Dierk. The quiet presence of this kind and loving man is greatly missed.

Don was born in Chicago on February 12, 1930, a date he shared with Abe Lincoln, another tall, thin Illinoisan. As a teenager, he became a life-long Cubs fan while selling hot dogs at Wrigley Field. He attended Illinois College where his coursework in science was set aside while he pursued debate and theater interests. He later received an honorary doctorate from Illinois College. After earning a Masters Degree in Speech at the University of Illinois he was drafted into the Army where he served as a counterintelligence agent stationed in Tokyo.

While teaching at Illinois College, he met his first wife, Nancy Jane Pierce whom he married in 1956. He and Nancy had two sons, Dierk Theodore (1958) and Mark Andrew (1960). Donald completed his Ph. D. at the University of Iowa in 1961 in the field of theater arts.

He became a full professor at Northern Illinois University where he taught acting, playwriting, and theater history and criticism. He directed some 50 plays in which he enjoyed occasionally taking an acting role. He was greatly loved as a teacher by his students. His professorial activities also included being publisher of “Players Magazine”, coach of the university sailing team, and holding various positions in educational administration. As state president of the Association of University Professors (AAUP), he lobbied in Springfield for teachers’ rights.

Don was widowed in 1983 when his wife, Nancy, died of cancer. A few years later, he met and married Jacqueline Tingle. She and her daughter Julia became a part of the Polzin family. Upon his retirement, he made his home in Thiensville, Wisconsin, later purchasing a rustic Swedish-style cottage in Sister Bay where the family spent summers. He kept a boat on the Ephraim Yacht Club dock, sailed in regattas with his son Dierk and friend, George Carey. He was active with the Unitarian Universalist Fellowship of Door County, occasionally delivering the Sunday sermon.

His interests and talents were varied. He designed his family home, became a sailor, was active in Unitarian Universalist congregations, studied foreign languages, explored Buddhist thought and read widely in the fields of science and contemporary literature.

He was preceded in death by his wife, Nancy Jane Pierce Polzin and sister, Betty Polzin Amador. He is survived by his wife, Jacquie Polzin, her daughter Julia Sellin, sons Dierk Polzin (Svetlana Karpe), and Mark Polzin (Julie) and granddaughters Sydney and Haley. A celebration of life is planned for July, 2023 in Ephraim. Memorials may be sent to the Door County Land Trust.