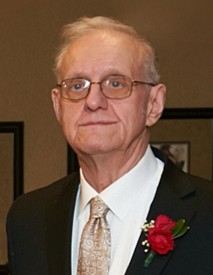 He was born November 11, 1938 in Harvard, IL, the son of Hubert J. and Evelyn Margaret (Cody) Nolan. Don grew up attending St. Joseph Parish in Harvard and graduated from Harvard High School with the class of 1957. He worked in general home construction before enlisting to serve his country with the United States Navy in 1959. Don was a Seabee in the Navy and served until his honorable discharge in 1963.

Upon his return home, he went to work for Arnold Engineering in Marengo, IL. Don was an avid union member and served as President of the local union. He also worked for Dean Foods in Chemung, IL.

Don married Doris Mae Johnson in October of 1966 in Illinois. They were blessed with two children: Timothy and Patricia.

In the early-mid 1970s, Don went to refrigeration school (while working) to begin his own refrigeration business. He and Doris put a down payment on a house in June of 1976, but she suffered a cerebral hemorrhage a couple weeks later and died.

Don then went to school to service dairy equipment. He moved up to Owen, WI from Harvard, IL and started Nolan Equipment which he operated until 1983.

Don went back to school to earn his insurance license to sell insurance for George Fischer out of Owen and eventually obtained his real estate license in 1985. He went to sell real estate in Wisconsin Rapids for a couple years.

Don was definitely a numbers guy and had a passion for woodworking. He was a journeyman carpenter and belonged to the North Central State Regional Council of Carpenters.

Don met Susan Scott in the Wisconsin Rapids area in 1998 and resided there until 2019 when they decided to “retire” to Door County, WI and make their home in Sturgeon Bay. However, Don’s declining health caused him to move into Sturgeon Bay Health Services where he currently resided.

Those who knew Don could attest to what a great storyteller he was and how he loved getting a laugh out of people. He also liked to go deer hunting.

Don’s life will be honored with a memorial service held at 3:00 p.m. on Friday on May 20, 2022 at St. Joseph Catholic Church in Harvard, IL. He will be laid to rest in the church cemetery beside his wife, Doris.

There will be no visitation at the church, prior to the memorial service.

“Our family would like extend a heartfelt thanks to the staff at Sturgeon Bay Health Services for the care given to our dad during his time there.”

Huehns Funeral Home, Inc. & Door County Crematory LLC in Sturgeon Bay are assisting the Nolan family. Expressions of sympathy, memories, and photos of Donald may be shared with his family through his tribute page at www.huehnsfuneralhome.com.