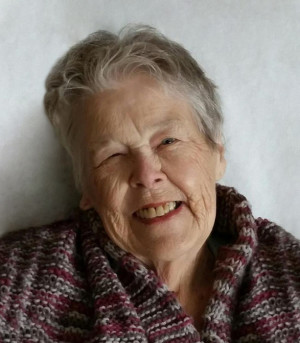 In the early morning of September 11, 2015, in the arms of her daughter, Kathy, Dorothy Ann Gerl, age 92, of Sturgeon Bay, went to her eternal home.

Dorothy was born on March 25, 1923, on a farm in Cato, WI, to the late Mr. Charles and Mrs. Ginny (Brennan) McCulley. Dorothy and her twin sister, Dolores, were the youngest in a family of nine siblings. Dorothy attended nurses training at Silver Lake College of Holy Family Memorial Hospital in Manitowoc. Dorothy graduated as a Registered Nurse and spent many years working in hospitals in both, Manitowoc and Sturgeon Bay. Eventually, she spent the later years of her career working in Sturgeon Bay with Dr. Brooks and Dr. Keith Anclam. Dorothy enjoyed reflecting back on her ministry as a nurse and was especially fond of the time she spent helping deliver babies.

Dorothy married her husband, William “Bill” Gerl, Sr., on October 26, 1946, in Clark Mills, WI. They were together for 44 years until Bill preceded her in death on November 23, 1990. Together, they raised four children: William Jr. (Maria) Gerl, Mary Vig (special friend, Ken), Peter (Janet) Gerl, and Kathleen (Thad) Birmingham, all of Sturgeon Bay.

Dorothy was preceded in death by her parents; five sisters and three brothers; her husband, William; and her granddaughter, Sonya (Gerl) Wiegand.

There are many words one thinks of when recalling Dorothy’s life, as she was a compassionate person who touched many lives. She cared for many people, not just as a nurse, but also as a mother, grandmother, friend, neighbor and woman of faith. Dorothy was a rock of strength to those who loved her and her faith carried her through life’s ups and downs.

Upon retirement from her nursing career, Dorothy spent many hours doing the things she loved greatly, including, babysitting, baking, helping out at church, leading prayer groups, knitting, helping out with the DOOR CANcer group, and providing respite through Neighbor to Neighbor. Over the last few years, Dorothy looked forward to her time at the Senior Center where she enjoyed exercise class, knitting hats for the school kids, and weekly lunch with friends.

A Mass of Christian Burial will be celebrated at 11:30 a.m., Tuesday, September 15, 2015, at St. Joseph Catholic Church in Sturgeon Bay with Fr. Robert Stegmann as celebrant. Dorothy will be laid to rest in St. Joseph Mausoleum.

The Rosary will be prayed at church, Tuesday morning, at 9:15 a.m. with visitation continuing from 9:30 a.m. until the time of Mass.

The family would like to thank Unity Hospice, especially Heather and Jenny, for the care provided to Dorothy in her final months.

Rest in peace, our sweet mother!