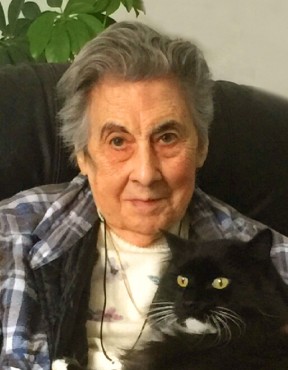 She was born January 13, 1922 in Chicago, IL, the daughter of George and Catherine (Warger) Davidson. On June 1, 1942, she married William R. Off. They moved to Sturgeon Bay, WI after WWII where they began their family. After Bill’s death in July of 1956, Dorothy devoted the next 36 years to her five children, working for Evergreen Nursery. In 1979, she married Joseph A. Schuster. They spent winters in Des Moines, IA, Yucatán or Acapulco in Mexico but always looked forward to summers in Door County. After Joe’s death, Dorothy returned to live full-time in her beloved Sturgeon Bay home where she tended to her pets, gardens, and wild birds. She was happiest with soil under her fingernails and strived to be an example of Christianity through her faith, love, and charity to all living things.

In lieu of flowers, memorial contributions may be made to your favorite charity.

A Mass will be celebrated at a future date in Dorothy’s honor at St. Joseph Catholic Church in Sturgeon Bay, WI.

A private memorial celebration of her life will be held in September of 2018 at the Off farm.

Huehns Funeral Home, Inc. & Door County Crematory LLC in Sturgeon Bay, WI are assisting the family. Expressions of sympathy, memories, and photos of Dorothy may be shared with her family through her tribute page at www.huehnsfuneralhome.com.