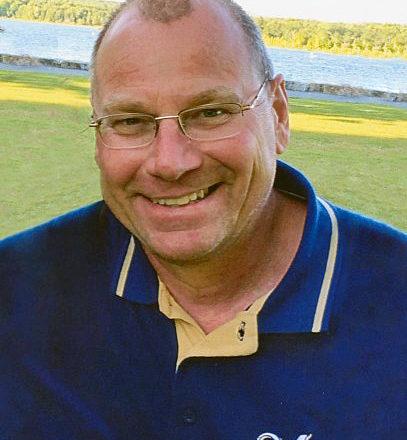 He was born on December 10, 1961 to Byron (Jr.) and Elizabeth (Schafberger) Anschutz in Green Bay. Doug attended Sevastopol School and graduated with the class of 1980. He was a devoted dad to his children, Alex and Kaitlyn.

Throughout his lifetime, Doug loved spending time with them attending their school and sporting events, enjoying annual family vacations together, and watching them mature into young adults. Just seven weeks ago, he was introduced to Grant, his grandson (son of Kaitlyn and Todd Polster), and the two spent memorable time together.

Doug was employed by Hatco Corporation for the past 14 years as the Model Shop Team Leader. Prior to this time, he worked in Door County’s maritime industry where his craftsmanship could be found within Palmer Johnson Yachts, on board vessels produced by Peterson Builders, and prior to that time at Bay Shipbuilding Co.

There wasn’t a job Doug couldn’t do, or problem he couldn’t solve. His sense of humor and playfulness while at work or at home was an endearing quality that will be missed most by family and friends. In his spare time, Doug loved to hunt and fish. He also built two of his houses and a wooden boat to troll off the shore of his home. Doug shared many Door County sunsets with Julie on the deck or in a hammock, and when hosting summer barbeques with extended family and good friends. His light-hearted and generous way was an example for all who knew him. Doug’s sudden death also brought life to others through his gift of organ donation.

He is survived by his children, Alex (Thomas Clough), Kaitlyn (Todd Polster); his grandson, Grant; the love of his life, Julie Behnke; his mother Betty Anschutz; his sister, Sue (Steve) Stangel, his nephew, Travis (April) Stangel, his brother, Dean (Sue) Anschutz, his nephew, Nathan, and niece, Elise Anschutz; his sister-in-law, Christine Wendler Anschutz; the mother of his children Kim (Fehl) Anschutz; and the Behnke Family including Ann, Doug and Mary, Tom and Vicki, Nancy and Dennis, James and Al; as well as his beloved dog, Harrison.

Doug was preceded in death by his father, Byron on October 3, 1986; his brother, Steve, on February 10, 1998; his maternal and paternal grandparents; an aunt and two uncles.

A celebration of Doug’s life will be held on Thursday, July 20, 2017 at Huehns Funeral Home in Sturgeon Bay. Family and friends may call at the funeral home from 3 pm until the time of the prayer service at 7 pm with Pastor Tim Malek officiating. Doug will be laid to rest in the Egg Harbor Town Cemetery near his brother, Steve.

The family would like to thank the Behnke family and Amy Kohnle for all your compassionate support, love, and guidance during this very difficult time, as well as the kindness extended by dear friends, co-workers and the staff of Bellin ICU.

In lieu of flowers, a memorial fund will be established.

Expressions of sympathy, memories, and photos of Doug may be shared with his family at www. huehnsfuneralhome.com.