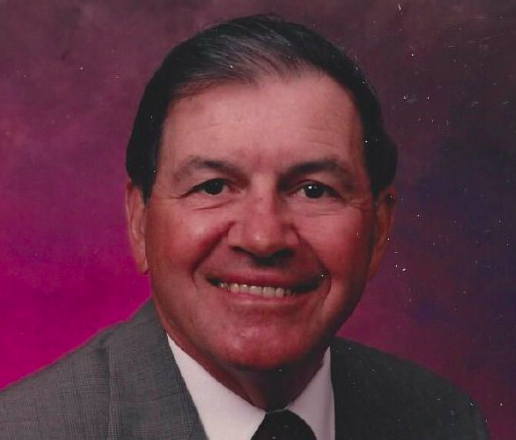 Earl was born at home on the family farm in Baileys Harbor, the son of the late Martin Louis and Esther Margaret (née Resler) Schram. In 1949, he graduated from Gibraltar High School, where he exceled in football, baseball and basketball. He was inducted into the Army, serving in the Korean War, where he received the Purple Heart. After his service, he graduated from Marquette University School of Dentistry and lettered in golf. He practiced dentistry for 40 years in West Allis.

He married Sarah Jane O’Connell and had six children. They raised their family in Brookfield and shared 33 years of marriage until her passing on November 14, 1991.

In 1994, he married Audrey Larson and later retired to Sister Bay. He had many good years with his friends and was an avid golfer. His favorite course was Maxwelton Braes, where he was once a caddy, and where he made three of his five holes-in-one.

Earl will be remembered for his profound Catholic faith, kind spirit, love of family and generosity. He was a longtime member of Stella Maris Parish.

He will be deeply missed by his wife, Audrey; children, Carol (Jan) Barr, David (Maria) Schram, Phillip (Kim) Schram, Susan (Wayne) Kuske and Robert (Laura) Schram; step children, Lisa (Gary) Mandelin and Mitchell (Janie) Larson; 15 grandchildren and one great-grandchild. He is also survived by his brother, Gene, along with a wealth of extended family and friends.

Earl was preceded in death by his parents; wife Sarah O’Connell Schram; his son, Major Mathew Schram, who was killed in action in Iraq; and brothers, Gordon and Darrell Schram.

A Mass of Christian Burial will be celebrated at Stella Maris Parish in Sister Bay, 2410 S. Bay Shore Dr., on Saturday, May 25, 11 am, with Fr. David Ruby officiating and Fr. Arthur Heinze co-officiating. Earl will be laid to rest in Highland Memorial Park in New Berlin.

Family and friends may gather at the church beginning at 9:30 am until 10:50 am.

Earl’s family would like to express their heartfelt thanks to the wonderful care given to him by the staff at the Scandia Village and Unity Hospice.

In lieu of flowers, gifts in his memory may be made to the Parkinson’s Foundation or the Foundation for Religious Retirement.

Casperson Funeral Home in Sister Bay is assisting the Schram family. Expressions of sympathy, memories and photos of Earl can be shared through his tribute page at caspersonfuneralhome.com.