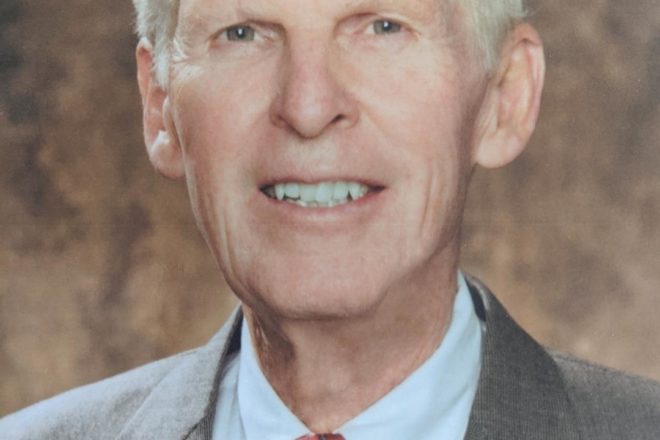 Len was born and raised in Chicago, IL. He attended the Chicago Latin School and graduated in 1953 from Harvard College with a major in history and pre-medicine. He then attended Northwestern University, where he graduated with an MD degree in 1957 specializing in urology and surgery.

Len and Claire met in 1949 on a blind date at a Harvard-Yale football game. They married in 1955, lived in Chicago and settled in Janesville, WI from 1962 to 1993 where they raised their four children and he practiced Urology. Upon his retirement in 1993, they moved to Sarasota, FL and continued to enjoy summers in Fish Creek, WI.

Len made a large impact on many people in Wisconsin through his practice of medicine. He became the Chief of Staff, President and Chief of Surgery, and Medical Society President while practicing at Mercy Hospital in Janesville.

A world traveler, gourmet cook, and gardener, he had an insatiable intellectual curiosity and valued education which he shared with his children and grandchildren. His love and support of theater, opera, art, and music kept him active in all the communities in which he lived. He spent many hours boating, sailing and fishing in his beloved Fish Creek waters, as well as hiking the trails and picnicking at Newport State Park, among others. He was also a long term Rotary Club member.

He was very proud of his familial ties to Door County and worked tirelessly to document its history through the Hotz family archives and preservation of family paintings and photographs. He wrote “The Ferdinand Hotz Legacy” which honors the Hotz family’s history. His most recent contribution was the renovation of the Hotz Trail stone entry gate at Newport State Park.